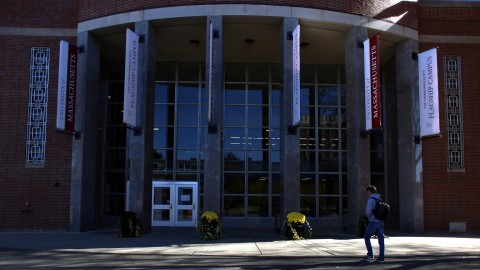 Former Tibetan political prisoner Ngawang Sangdrol will speak about human rights in Tibet and her experience in prison at 11 a.m. on Saturday, Dec. 10 in the Cape Cod Lounge.

The University of Massachusetts chapter of Students for a Free Tibet is hosting the event. The event will take place on Human Rights Day. The group organizes political and cultural events in order to raise awareness of the Tibetan independence movement.

Kalsang Nangpa, a senior public health major and president of UMass SFT, went to Boston to advocate for Tibetan independence, where she heard Sangdrol talking about her experience in prison.

“I thought it would be very powerful and a good experience for the UMass community and the greater Pioneer Valley community to hear about this story,” Nangpa said.

Sangdrol was arrested by the Chinese government in 1992 (she was a 15-year-old nun at the time) for protesting the Chinese occupation of Tibet. She was sentenced to 23 years on charges of counter-revolutionary propaganda.

Sangdrol’s arrest sparked attention from human rights organizations, which pressured the Chinese government to release Sangdrol. In 2002, she was released after only serving 11 years for “good behavior.”

A group of Tibetans residing in Amherst and surrounding towns will also sing the Tibetan national anthem and a song dedicated to the Dalai Lama. Sangdrol intends to speak for about 30 to 40 minutes followed by a question and answer session. The event will last two hours. Tibetan cookies and tea will also be served.

Sangdrol will speak Tibetan during the event. An interpreter will be present to translate for the audience.

“I thought it would be more powerful to hear her speak in her native language so that she can convey her feelings better,” Nangpa said.

Sangdrol plans to discuss her experience in a Chinese prison.

“I remember her talking about getting beaten up with iron rods,” Nangpa said. “When she was in prison, she was suffering from a lot of medical conditions because of what was going on inside.”

Sangdrol will also discuss the current state of human rights in Tibet. Nangpa cited that Tibetan citizens do not have the right to carry the Tibetan flag and a picture of the Dalai Lama.

“If they’re doing these things, if they’re found singing the Tibetan national anthem, saying slogans like ‘long live the Dalai Lama,’ they can be put into prison,” Nangpa said. “And once you’re in prison, you don’t know what’s going to happen to you and this is one story.”

“China is trying to make [Tibet] into another part of China,” said Catherine McEachern, sophomore psychology and pre-med major and treasurer of the club. “They’re trying to put people in schools to learn Chinese, forcing these people to become part of China against their way.”

McEachern hopes that the event will educate people who may not be aware of the issues that are currently facing Tibet.

“They have no idea what is going on because you don’t really see it a lot in mainstream media,” McEachern said. “But I think just simply coming into this event you don’t really have to have any knowledge of it whatsoever.”

Both Nangpa and McEachern hope that the event will bring in members of the UMass community and the Tibetan community in surrounding towns.

“This [event] would be the start of starting to learn what to do to help people in other countries and spark that passion for international human rights [issues],” McEachern said.