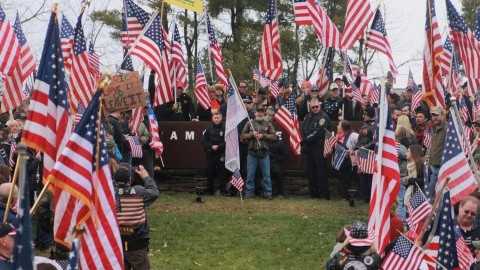 Fox News’ reporter Jesse Watters of the “O’Reilly Factor” told Hampshire College President Jonathan Lash that the whole country was laughing at him.

Watters came to Amherst weeks after the American flag, normally waving high above Hampshire College’s campus, was removed in order to witness a protest by local veterans and others of the college’s actions. He asked Lash, “Don’t you think you owe it to the veterans to explain yourself?”

Interestingly, it was Watters who posed this question, a college-educated reporter who has never served in the military himself but feels he is justified in speaking on their behalf as a conduit. I will not speculate as to whether actual vets in the Pioneer Valley or elsewhere would accept him as their messenger.

As well, I should note that this exchange occurred in Lash’s garage, where Watters was waiting with a cameraperson on hand to berate the Hampshire College president as he got out of his SUV.

Regardless, earlier that same day, Watters spoke to a number of non-descript white men in what appeared to be an Amherst restaurant about the matter.

They told him Lash had gone to the local Veterans of Foreign Wars (VFW) and apologized for the flag being removed. One interviewee was also careful to note that when asked about Lash’s reasoning for removing the flag in the first place, it was to uphold “fairness, justice, blah-blah-blah.”

To the interviewee, these reasons seemed not to suffice, for he asserted, “they were the same reasons that you hear all the time.”

At first, I simply observed that reporting could precariously lack diverse sources, blatantly neglecting a whole half of the story, and could seek to blatantly adhere to a single ideology, one of Fox News’ most senior “journalists,” Bill O’Reilly.

The situation was described by one of the men as, “the flag was burned so there was a situation we had to address.”

I wondered specifically whether it was the notion that the flag was burned that had these men react or if prior frustrations with those who they perceived were set against them were given a base by these latest actions.

I feel I need to reiterate that I would do a better job of individually identifying Watters’ interviewees, but O’Reilly only describes them as “the folks” in his introduction to the scene; no mention is made of where exactly Watters is when he’s speaking to them, and they all seemingly fall into the same demographic: white males over 50 years old.

Regardless, another of the men interviewed said he thought, “Most of the people at the demonstration Sunday were very disappointed in how insensitive some of the students are toward the flag. It was more of a group of people who came together because they felt so violated by what this student or students had done in terms of burning the flag.”

Burning something evokes emotion. Why exactly is hard to say. But for me, what is particularly intriguing is the response to no flag being present on Hampshire College’s campus at all.

Another interviewee Watters spoke with mentioned that the town of Amherst actually chooses to fly the UN flag, something he said he felt was “really leftist.”

Whether or not he perceives that negatively was not indicated. Nor was what he would think if Amherst flew no flag at all instead.

Notably, Amherst does also fly the American flag. The same American flag that veterans of this country stood by in times of great peril, and still do today.

Is anyone really to blame for their indignation in the burning of something they hold so dear?  I don’t really know.  I don’t really think so. Flags are a real piece of fabric abstract in nature, but too many people believe they represent something. What’s interesting to me is what different people perceive as that something.

Like anything with linguistic implications, a flag requires interpretation. Now, the United States government has said in its Pledge of Allegiance, which it all but requires small children to recite on a near-daily basis, that its flag represents “the Republic for which it stands.”

Unfortunately, to some, that Republic “for which it stands,” has been a source of oppression and violence, both direct and implicit.

To others, that Republic represents liberty, life and the pursuit of happiness.

While there is certainly a story in the burning of our nation’s flag and the subsequent backlash, I think the larger story exists in this difference of interpretation amongst groups of people.

Our flag has, in this case, proved itself to be a source of great tension between conglomerates of people and, on a personal note, a source of internal contradiction between believing in the betterment of this nation and the progress its made and feeling disoriented and disillusioned with the way government has disregarded the lives of large groups of people since its founding.

I think what needs more time are the ongoing discussions around questions of what the American flag truly represents. Ideally those are not always pre-empted by public shows of disregard for the flag, but instead public forum.