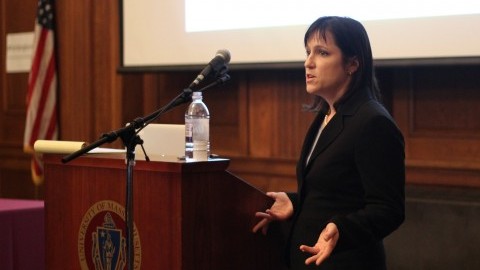 In his presidential campaign, Donald Trump promised to eliminate the executive order allowing immigrants protected by the DREAM Act to stay in the United States, end immigration of Muslims and deport all non-citizen residents with criminal records, even those here legally.

In reference to immigrant students’ reaction such promises, Professor David Hernández of Mount Holyoke College said, “Many students here feel legitimate fears and concerns.” He went on to explain that it is exactly those fears that inspired a special lecture meant to help shed light on the immigration system, and potential changes under the new administration.

The talk, entitled “Immigrant Students: Know Your Rights” was a last minute addition to the University of Massachusetts Department of History’s continuing “Feinberg Family Distinguished Lecture Series” held on Wednesday in the Integrative Learning Center. The event was cosponsored by the Mount Holyoke College Spanish, Latina/o and Latin American studies department and the Smith College department of history.

The event featured immigration attorney Megan Kludt, who explained the range of immigration policies and which ones were likely to be changed under a Trump presidency. To the relief of many students, rights like those of access to due process and the right to an attorney are protected in the constitution.

She said this means that mass deportation and denial of immigration to Muslim applicants would be extremely unlikely to be carried out. Furthermore, immigration law passed by congress is “unlikely to see change even with a new administration.”

“No major changes to U.S. immigration have been enacted by congress since the 1960s,” Kludt said.

She said congressional law establishes most legal paths to citizenship, and dictates under what conditions illegal immigrants can be detained or deported. Still other immigration policies are created by case law, the precedent set by courts over the years.

While Trump’s judicial appointments might alter case law in the long term, no short term changes are likely, so Kludt said the impact on current immigrant students should not be a concern.

There are, however, some immigration laws that could be quickly altered by the new administration. Kludt explained that immigration policy created at the discretion of regulators, like the Department of Homeland Security, and Immigration and Customs Enforcement, could be changed by Trump appointments within those agencies.

“We do not have reason to be particularly hopeful,” Kludt said about those appointments.

However, there is a section of immigration law even more vulnerable to change: the Deferred Action for Childhood Arrivals program. Kludt explained that DACA is unique because it was enacted by an executive order by Barack Obama.

“Literally, on his first day of office he could dismantle the program,” Kludt said of Trump. This means that DREAMers, immigrants who were brought to the United States illegally as children, could lose their legal status.

Kludt explained that even with a loss of status, this would not mean immediate deportation, as congressional law and the requirement of due process still block such action.

There are however, special vulnerabilities faced by illegal immigrants or immigrants whose legal status might be taken away by the Trump administration. Kludt said leaving the United States could be risky.

“If you know anyone under DACA planning to travel, I advise you to tell them to be back in the U.S. by Inauguration Day,” Kludt said

Students at the event reacted with hesitant relief.

One Mount Holyoke student, an economics and psychology major, said that as an Indian citizen she had been concerned about her legal status to study in the U.S.

“But at this helpful seminar and others I have fortunately learned I am protected from deportation,” said the student.

“I think there are a lot of things to be concerned about with the new administration, but am hopeful that with people organizing positive change can happen,” said Sabine Rogers, an environmental studies major at Mount Holyoke.

At the end of the event, Kludt said interested students should follow and support the actions of relevant immigration groups like the Immigrant Defense Project, noting that political outcomes could be influenced by diligent activism.

Editor’s Note: One source was granted anonymity for fear of retribution, as information given contains her citizenship and visa status.

Noah Kouchekinia can be reached at [email protected]