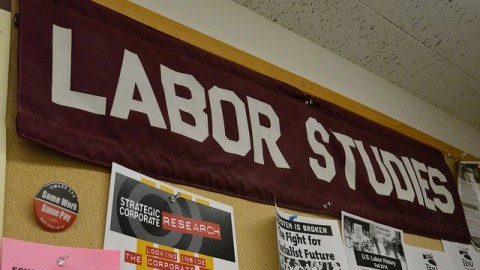 The Labor Center at the University of Massachusetts will see new investments over the next three years as part of a “plan to revitalize” the Center announced by UMass Chancellor Kumble Subbaswamy in a press release.

The press release, sent by the UMass Office of News and Media Relations, said the goals of the plan are increasing undergraduate enrollment by 100 percent from 100 students to 200, and maintaining at least 12 new, full-time students each year in the Labor Center’s residential master’s program.

“Inspired by a commencement address by AFL-CIO (American Federation of Labor and Congress of Industrial Organizations) President George Meany in 1964, the University created a labor relations and research center that has uniquely prepared labor leaders in Massachusetts and throughout the country,” Subbaswamy said in the release. “The steps we are announcing today reaffirm our commitment to this eminent program.”

The release said the Labor Center will receive up to six full-time equivalent graduate student internships per year, and that labor centers may provide up to $23,071 in funding for each internship, matched by $13,524 from University tuition waivers.

The work of these part-time graduate students will be focused on “teaching or assisting with courses either in labor studies or a related discipline in the College of Social and Behavioral Sciences,” according to the release.

The release said the University will also use any net income “from Continuing and Professional Education programs, such as the Union Leadership and Administration program,” to further fund other Labor Center programs.

Steven Tolman, president of the Massachusetts AFL-CIO union, said that gains made by the working class over the last hundred years could be taken away “with the stroke of a pen” in the release.

“We must continue to organize, educate and activate our civic society to stand up for workers’ rights. The UMass Amherst Labor Center is needed more than ever,” he said. “I applaud the chancellor for his vision and commitment.”

“This plan is a giant step towards re-establishing the UMass Labor Center as the nation’s premiere institution of education for the next generation of labor leaders and in-depth research on the issues confronting America’s workers,” he said in the release.

In a phone call, UMass Executive Director of Strategic Communications and Special Assistant to the Vice Chancellor Ed Blaguszewski predicted the timeline for the implementation of this funding.

“I suspect it will be most likely next fall,” he said.

A letter written by former UMass Labor Center Director Eve Weinbaum, describing cuts to the program by the University over the past decade, was published in early September, leading to controversy over whether UMass was trying to eliminate the program.

Weinbaum, in an interview with the Daily Collegian and WMUA News, said she and other faculty members were explicitly told on multiple occasions they could only accept fully-paying graduate students, significantly limiting the amount of students from working-class backgrounds they could accept.

Weinbaum, whose email described her being ousted from her position, also said she had been told the Labor Center must act as a revenue-generator for other departments in the College of Social and Behavioral Sciences.

John Hird, the dean of SBS, disagreed with Weinbaum’s assessment and said the University had not made these demands of the program.