Listen when you argue to truly understand 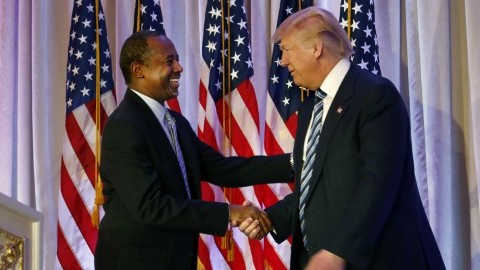 Even with the Presidential Election now nearly a month past, politics have not slipped to the back of many people’s minds. That’s not surprising, given how much anger and fear half the population felt after the election of Donald Trump. Liberals have vowed to fight and stand up to Trump. But to understand why Trump was elected, and therefore how to best stop Trump, one has to understand the other side, the side that actually voted him into office.

To do this though, it is important to understand Trump did not get elected solely because of racist, sexist, homophobic, bigoted people. It is easy to think that anyone who voted for Trump is racist, sexist, homophobic or bigoted, but honestly that’s not the case. While prejudice absolutely played a part, and is no doubt a blight on this country that marginalizes and oppresses millions of people, there’s more to the story. You could study for years why the 2016 election turned out the way it did but other factors like the perception of Hillary Clinton and the public’s rejection of business-as-usual politics also contributed to Trump’s victory. People wanted change and many saw Trump as a harbinger of change. The cause of his victory is multifaceted.

Liberals, therefore, should not view all Trump voters the same way. While it is true that we all will have to deal with whatever Trump does as President, the portion of the population that Trump won is diverse in its beliefs. The alt-right and traditional conservatism are two markedly different ideologies but supporters of both voted Trump.

Jon Stewart, former host of Comedy Central’s “The Daily Show,” made this point in a recent interview with CBS This Morning. He talked about the hypocrisy on the side of the Democrats, noting, “But there is now this idea that anyone who voted for [Trump] is – has to be defined by the worst of his rhetoric. Like, there are guys in my neighborhood that I love, that I respect, that I think have incredible qualities, who are not afraid of Mexicans, and not afraid of Muslims, and not afraid of blacks. They’re afraid of their insurance premiums.” He goes on to make the point that “in the liberal community, you hate this idea of creating people as a monolith. Don’t look as Muslims as a monolith. They are the individuals and it would be ignorance. But everybody who voted for Trump is a monolith, is a racist. That hypocrisy is also real in our country.” We should view groups we oppose as complex entities, just as we see populations we support.

The political rift in the United States right now is no secret and the best way to bridge this gap is to listen to each other, especially when we disagree. The recent interview between current “Daily Show” host Trevor Noah and Tomi Lahren of “TheBlaze” is a model for how to have civil arguments with those we disagree with. In the 26-minute interview, both Lahren and Noah let each other talk without the urge to interrupt. They each could state their points and respond to the points of their counterpart. Even when Lahren made potentially instigative statements, such as “they subscribe to the Black Lives Matter movement. They say ‘we are the Black Lives Matter movement. Fry ‘em like bacon. Eff the police.’”

Noah did not lose his cool. This manner of discussion is the kind we need in this country. One would hope most arguments are of a similar temperament but many are not. This does not mean that we cannot vehemently argue our beliefs or stand up for our ideals, but just that we should listen while we do so.

Ultimately, as Stewart said, liberals cannot view conservatives as a monolith. To truly grasp why Trump is the President-elect, we must examine the motives that brought people out to vote for Trump. That process starts simply with hearing the voice of the other side.