Mindfulness in, and in spite of, a technological age 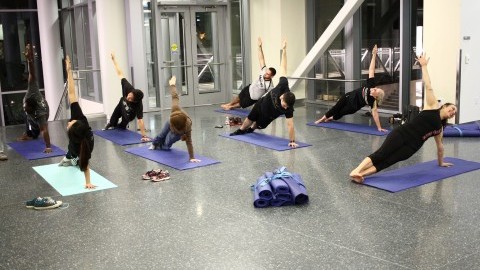 Every yoga class ends with Savasana, where bodies that were moving endlessly and contorting into impossible positions for the past hour finally come to rest quietly on their backs with eyes closed. This position, also called “corpse pose,” is as difficult as it is blissful. It is one that requires mindfulness and intention, qualities that are more elusive in our world than headstands or Chakra Bandhasanas (seriously, Google this one). In our society, it’s easier to push oneself into a posture than it is to detach from the constant stream of stimuli that runs through modern life.

At the bus stop, before class begins, in the dining hall and everywhere in between, people sit on their phones and laptops, mesmerized by screens and temporary pleasures. Though “social” in name, people tend to engage with these medias by isolating themselves from their surroundings. I never feel lonelier than when I look around and confront the reality that people would rather look at memes than have a conversation. Technology has changed our lives irrevocably, without our approval or even acknowledgment.

What are we looking for on social media? Companionship? Comfort? Love? We’ll never find it there; it does not and cannot exist in that realm. Of course, the internet connects us with long distance friends and offers a glimpse into the lives of those with whom we were once close, but at what cost? We trade our present life for nostalgia, pause to take pictures and miss the moment and sacrifice authentic joy for the appearance of it. We have incorporated Facebook, Instagram and Snapchat unthinkingly into our lives, and they have, for better or for worse, transformed us.

The popular television series “Black Mirror” touches upon the dystopian possibilities of our addiction to technology, and its predictions are often uncomfortably plausible. Perhaps ironic in its medium, the show is an anthology of episodes, each representing some future point based on the current trajectories of the ways in which humans and technology interact. One of the most disturbing episodes incorporates bystanders who document rather than intervene in stopping a terrible crime. The people of this dystopian future look a lot like the people of our present, and we need to critically engage with the ways in which technology seduces us into inaction.

Yoga isn’t the only way to practice mindfulness, and it’s not for everyone. We can all lead more intentional lives by examining our practices and spending time with ourselves. It’s important to assess the technology that we incorporate into our routines in order to evaluate what levels bring about the highest contentment. In a world where oranges are peeled and then sold in plastic wrap, we are obligated to determine whether what we call advancement is really moving us toward a brighter future.

By all means, use phones and social media as much as you’d like, but make sure it’s a real choice. Only when we intentionally come to know ourselves can we determine what is in our best interest.