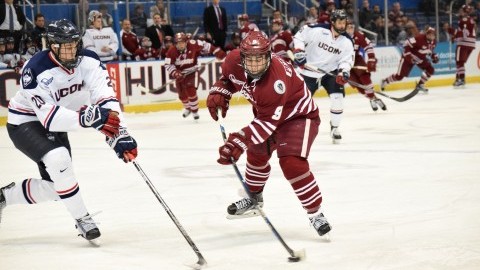 Coming out flat has been an issue for the Massachusetts hockey team when playing games inside its home confines of Mullins Center. Whether it be a lack of intensity, a sense of complacency or just being out worked by their opponents, the Minutemen have had a difficult time starting games with urgency.

That trend was unfamiliar to the group outside of Amherst until Friday, when it was the deciding factor in the team’s loss Friday night at the XL Center.

UMass (4-9-2, 2-7-1 Hockey East) fell behind 2-0 early in the second period and could not overcome the early deficit to its conference rival Connecticut, falling 3-1 in the teams’ second contest this season.

“This is the first game in the last five or six that I wasn’t really happy with my team,” Minutemen coach Greg Carvel said. “The room was quiet and I had this sense that we weren’t ready to go. I thought as the game went on we started to find some more energy.”

UConn’s Tage Thompson – one of the most skilled players in Hockey East – made his presence felt in the second period. Thompson expanded the Huskie lead to 2-0 after deking past both Austin Plevy and Ray Pigozzi before firing a wrister from the top of the right faceoff circle past Ryan Wischow.

“It’s not often that we prepare a game plan when we talk about one player on another team but that was the case tonight,” Carvel said of Thompson, who increased his goal total to 12 after scoring two on Friday.

UMass cut the deficit in half on a late third period power play goal from captain Steven Iacobellis. Defensemen Jake Horton fed Austin Plevy on the far end of the blue line upon entering the zone. Plevy put to puck on Iacobellis’s stick on a nifty cross ice pass that the captain shot past UConn (6-6-6, 4-3-2 HEA) goaltender Adam Huska’s low glove side with just under three minutes remaining in regulation.

Plevy picked up his team-leading 11th point on the play and his ninth in the last 11 games. He had a chance to score one of his own in the waning moments of the second period but his shot in the slot was denied by Huska (24 saves). Iacobellis’s goal was his sixth point in five games (two goals, four assists) and the 75th point in a Minutemen sweater.

UMass outshot the Huskies 25-19 in total and nine shots to four in the third period but allowed an empty net goal in the final seconds to seal its fate.

The Minutemen were on the man advantage six times – twice in each period – compiling 11 of their 25 total shots on the power play (44 percent), but scored just once. Horton had chances on many of the power play opportunities and totaled six shots for the game and picked up his fourth assist of the season on the Iacobellis goal, tying a career-high for a single season.

UMass was awarded a power play 20 seconds into the first period when Ryan Badger absorbed a crushing cross-check from UConn’s Derek Pratt. Badger didn’t return for the rest of the game with an upper body injury, but Carvel doesn’t expect him to miss much time.

The Minutemen couldn’t score on the man advantage and failed to prevent the Huskies from attacking their offensive zone. UConn’s Maxim Letunov drove right at goaltender Ryan Wischow (16 saves) and was unable to get a shot off. But the puck proceeded to be pushed out of the crease then blasted into the back of the net by Benjamin Freeman who trailed on the odd-man rush. The goal gave the Huskies their first lead of the night at 7:38 of the first period.

Kurt Keats had the best chance to get the Minutemen on the board on a short handed opportunity in the first period but hit the post.

“We stressed that the first five minutes are the most important in the game and we didn’t take it to them enough,” Iacobellis said. “We have to find the urgency and will to win early on before we’re behind the eight ball.”

UMass will travel to non-conference Princeton this Tuesday for a 7 p.m. puck drop with the Tigers.