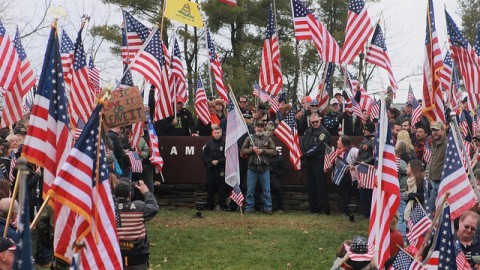 Hampshire College President Jonathan Lash announced Friday that campus will resume flying the American flag, following controversy surrounding the decision to temporarily remove it. Organizers of the Raise The Flag protest held at Hampshire College last Sunday held a brief press conference Friday afternoon to praise this decision, and to announce that plans for a second rally at the campus next Sunday remain in place.

Several representatives stood outside the Veterans of Foreign Wars post 754, including Colleen Chesmore, who spoke about the flag’s symbolism and significance.

“It’s a sad day when kids on college campuses fear the flag. That’s not what it stands for,” she said, adding that she believes it is not racist or discriminatory, but “a welcoming sign of this great country.”

Chesmore is not a veteran, but said she was inspired to organize the initial rally after seeing a display of American flags on the Springfield common. She contacted Victor Nunez Ortiz, commander of the Amherst VFW, to arrange last week’s protest.

The Massachusetts Daily Collegian reported a crowd of roughly 300 veterans, families, and protesters gathered at Hampshire College last Sunday in response to the decision to stop flying the flag.

Initially, Lash announced that the flag would be flown at half-staff at Hampshire for the campus to “express grief over the violent deaths being suffered in this country and globally.” Then on Veteran’s Day, a Hampshire student took down and burned an American flag after the election results. Following these controversies, the College made the decision to temporarily stop flying it.

At Friday’s press conference, Nunez Ortiz invited Hampshire College students to speak with veterans at the VFW about the flag’s symbolism and importance.

Nunez Ortiz continued that he will be leaving for North Dakota next week to raise the flag and stand in solidarity with Dakota Access Pipeline protesters.

“I want to show that if we all stand for the flag together, we can get a lot of things done,” he said.

He added that he is neither a Democrat nor a Republican, but seeks to unite both sides.

Next Sunday’s rally will celebrate the decision to replace the flag, but Nunez Ortiz stressed that organizers hope to “continue the dialogue” about the issue and not brag about the victory. He stated that Hampshire College students are welcome to speak at the event as well.

Nunez Ortiz anticipates that hundreds of veterans, families, and supporters will attend from Massachusetts, New Hampshire, and Rhode Island, including a local Boy Scout troop.

“Families are welcome,” he said. “We’re not there to cause violence.” He continued: “This is a learning experience for everyone. Now we move forward and continue the dialogue.”

Sunday’s rally will be held at noon at Hampshire College.