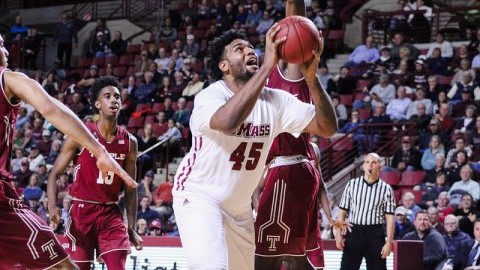 PROVIDENCE –– Under Derek Kellogg, the Massachusetts men’s basketball team has predicated itself as one that gets easy transition baskets as well as relying on 3-point shots as its foundation.

UMass (6-3) couldn’t do either of those things during Saturday’s 75-69 loss to Providence College at Dunkin’ Donuts Center, but it may have found an answer to attack opponents when neither the outside shot nor fast-break buckets are coming at a premium rate.

With the Friars (8-2) settling into a 2-3 zone defensively for most of the afternoon, the Minutemen struggled to get into an up-tempo game while enduring lulls on offense with PC controlling the pace of play.

UMass did however find its most success when getting Rashaan Holloway the ball inside of the Friars’ zone. The 6-foot-11, 310-pound center finished with a team-high 21 points and nine rebounds, and was the biggest factor into the late Minutemen run that cut PC’s lead from 16 to three with two minutes, nine seconds remaining in regulation.

“We needed to win,” Holloway said of his added aggression on offense late in the game. “I knew coach was hoping for me to have an excellent game today and for us to come out with a win. I tried my hardest.”

During that stretch, Holloway scored 11 points during UMass’ 21-8 run that started with his free throw with 9:08 left. He shot 6-for-7 in the second half from the field, while making 7 of his 13 free throw attempts throughout the game.

“They were trying to go with a heavy dose of Holloway,” Friars coach Ed Cooley said. “We were trying to front-side front him, back him help-side and I think for the most part we did a really good job.”

“It was definitely a challenge,” Holt said. “But like coach said, we scouted it. We wanted to front the post and have help [on the weak side] and my teammates just helped me out guarding him.”

Kellogg said he was happy with Holloway’s performance, and that in order for the Minutemen to be successful moving forward, need his low-post scoring to be a focal point in their offense.

“I’ve been on him quite a bit,” Kellogg said. “[I told him] just work, if you just work at your size, good things will happen. I thought the guys looked for him, and he was really much bigger than them inside.”

“I’ve been talking to some people and watching some tape and for us to be a next-level team, you have to have some inside presence where you can throw the ball inside and get some baskets,” Kellogg added. “I think he provided that for us … it looked like some of the games he those last five games last year.”

More than half of UMass’ 60 field goal attempts were from 3-point range, as the Minutemen shot 10-for-33 as a team from beyond the arc.

In addition to UMass’ poor shooting performance, the Friars defense limited it to only six fast break points.

“I didn’t feel like we ever got into a great rhythm throughout. I thought it was a little stogy. The zone was a good move.” Kellogg said.

Holloway believes that if he can develop a consistent and reliable low-post game, it will open up better shots for the Minutemen’s perimeter shooters.

“I think that’s [how] Luwane [Pipkins], Donte [Clark] want me to play all the time,” Holloway said. “I need to continue to work, continue to show them that I can play like that every game, so that way they can get open shots, they can score and teams won’t double team them and crowd them.”

“By me scoring, by me opening up things, rebounding the ball, it opens up a lot of opportunities for other players on our team and it’s what we have to do to win.”