Souza: Midseason grade for UMass hockey is good, not great 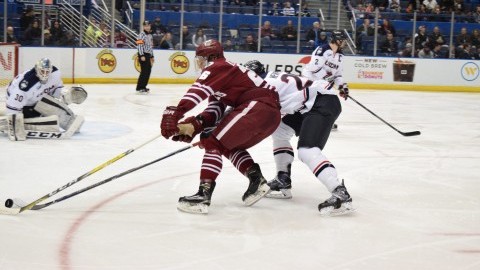 Given how the Massachusetts hockey team finished the 2015-16 season – losing 22 of its last 24 games– to say UMass coach Greg Carvel had an uphill battle in his first year with the program would be an understatement.

Following their most recent loss to Connecticut on the road last Friday, the Minutemen have now dropped to  4-9-2 (2-7-1 Hockey East Association).  With that, UMass is actually off to a worse start on paper through the first 15 games this season than last year under Micheletto (6-5-4, 2-2-4 HEA).

However, given the circumstances of how the previous season ended and what Minutemen had to overcome at the start of this season, there is still plenty to feel positive about if you are a UMass hockey fan.

Carvel hasn’t been shy about what his goals for the season have been, and he maintained a realistic standard for the Minutemen at the beginning of the season and has held to it.  He knows that establishing national relevancy is not something that can be accomplished in just one season but he has focused on building the culture that can eventually get UMass there.

“This is a team that is not used to winning in the last couple of years, and is just starting to learn how to do things the right way,” Carvel said of his team back on Nov. 30. “It doesn’t happen just because you do it for one game. You have to do things right over and over again, and we’re getting there. I’m proud of this team.”

My midseason grade for Carvel’s first year with the Minutemen: B+.

Starting with the positives

UMass’ most impressive win so far this season was its 5-4 win over No. 12 Notre Dame at home on Dec. 2. Five goals marked a season-high for the Minutemen to this point and a victory over a ranked opponent is something they failed to accomplish all of last season.

Another positive of the season has been the impact of this year’s freshman class. Defenseman Shane Bear and forwards Jonny Lazarus and Niko Hildenbrand have each scored three goals, with Lazarus and Bear each adding three assists.

Also, in goal, Ryan Wischow has begun to separate himself. Starting the season splitting time with sophomore Nic Renyard, Wischow has now started five games in a row, for a total of 11 starts in 15 games with all signs indicating he’ll be the outright starter in net for UMass going forward.

Typically it doesn’t say great things about your team when ranked at the bottom of the conference in both scoring offense and defense, but there is a caveat to it.

The Minutemen’s offense this season has been more inconsistent than bad. So far UMass has only been shutout once this season, which happened seven times last year.  Carvel has recognized that the Minutemen would have a tough time scoring this season.

“We’re not going to be a team that scores four or five goals a game, so we have to manufacture goals,” Carvel said of his team’s offensive production on Nov. 30. “I think if we can manufacture one more power play goal a game we’ll be in good shape most nights.”

In terms of offensive production, the Minutemen seem to be trending toward an offense by association team with no real “star” player emerging like a Tyler Kelleher of New Hampshire – leading the Hockey East with 31 points.

The past three games have also been a microcosm of its offensive inconsistency as UMass failed to score in the five of six combined periods against the Fighting Irish and Connecticut (both losses) following its five-goal performance on Dec. 2

Defensively, UMass has given up 50 goals in the first 15 games of the season, and while that accounts for the worst goals allowed average in the conference, it is still well below the pace of last year’s Minutemen who finished the season with 146 goals allowed in 36 games.

While the overall trend for UMass is positive, I can’t just hand out an” A” for effort alone. The results have to be there, and for the Minutemen, those results will come with time.

UMass as a whole has responded well to Carvel’s direction and leadership, and it has begun to show in the way it has played over the past three weeks – with perhaps the exception of the UConn loss.

Minutemen captain Steven Iacobellis has embodied what Carvel wants to accomplish in his first season at the helm, and his buying into Carvel’s system is beginning to translate on the ice.

“He’s a guy that I challenged at the beginning of the year as a captain,” Carvel said following Friday’s loss to UConn. “As we’re trying to re-establish a culture and an identity, it starts with me and it goes through my staff and then it has to go through the captain.”

This week UMass will have a chance to correct its recent problems with Princeton Tuesday and then a pair against Arizona State at Mullins over the weekend. This week could also serve as a momentum builder for the Mariucci Classic on Dec. 30, which will be their final games before the turn of the New Year.

I know UMass fans are probably tired of hearing this, but still, be patient. This is an improving team, but it will need a little more time before the improvements translate to winning on a consistent basis.

Nicholas Souza can be reached at [email protected] and on Twitter @nicksouza27.