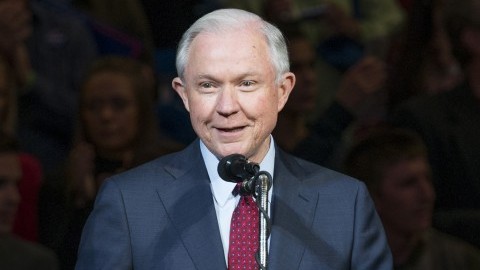 Recreational cannabis is set to become legal in Massachusetts this Thursday. For residents, this has massive implications in terms of criminal justice reform, taxpayer money spent on policing nonviolent crime and the prison-industrial complex.

The war on drugs is simply failing: the left can appreciate that legalizing cannabis will improve communities by placing a major block on the school-to-prison pipeline, while the right will take solace in the fact that Massachusetts is starting to abandon an increasingly expensive and unsustainable system. In other words, we seem to be re-learning what we found out almost a century ago—prohibition doesn’t work and, if anything, it causes more crime.

However, if the year 2016 has taught us any lessons, it’s that good things won’t last very long before the bad news sets in. As it turns out, President-elect Donald Trump is expected to pick Senator Jeff Sessions (R-AL) for the post of Attorney General.

This has drawn ample criticism from Democrats, such as Senator Elizabeth Warren, who has stated that Trump should reverse his decision to pick Sessions because of his history of bigotry. It should be rather revealing that his colleagues have testified that he has stated that he thought the Ku Klux Klan were “okay, until he learned that they smoked marijuana.”

Putting aside what an Attorney General Sessions could mean for the prison-industrial complex among Black, Hispanic and Native American neighborhoods, this should also be extremely worrying to anyone who believes in taking a liberal to moderate stance on cannabis.

As the nation’s top law enforcement official, Sessions would have the power to undo much of the progress that the individual states have made since 2012. Current Attorney General Loretta Lynch has admitted that the evidence doesn’t point to marijuana being a gateway drug in the ongoing heroin epidemic. The Obama administration had specifically pursued a policy of not enforcing federal law on cannabis in the states where it was legalized. While the substance is still federally illegal, and federal agents could theoretically arrest users in legal states at any time, the Obama administration had admitted that they would be hands-off on this exercise of states’ rights.

While Trump has appeared to be rather indifferent (or rather, unclear and contradictory) as to whether or not cannabis should be legal, Jeff Sessions poses a clear threat to the idea of states’ rights to legalize it. Attorney General Sessions has the ability to revert the Cole and Odgen memos, two Justice Department policies that had caused a decrease in nonviolent drug-related prosecutions. If Sessions goes back on these policies and implements policies in the other direction, we could potentially see the federal government intervening in states where cannabis has already been made legal.

The implications of this are clear: Donald Trump, for all his talk about his supposed conservatism, would be appointing an Attorney General who would pursue policies in clear defiance of the 9th and 10th Amendments. We can also expect that a Trump administration would disregard the 4th Amendment, as he has previously defended NYC’s controversial stop-and-frisk rule, a policy that was primarily about fighting nonviolent drug crime and which was later ruled unconstitutional.

At the very least, it’ll be a bit more than a month before Trump is inaugurated, during which he can’t do anything about it. In this time, we must be thankful for the idea that America is supposed to be a pluralistic nation that allows for states to experiment with policies to find which ones work best. A Trump administration would certainly pose a major obstacle to the idea of America as a laboratory of democracy, but in this case, it’s ultimately up to the people to remind the government of its constitutional limitations.