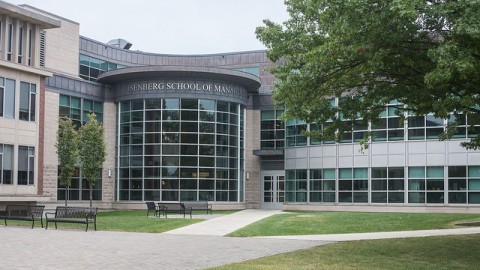 In the halls of the Isenberg School of Management, shouts of close victory and grunts of devastating defeat could be heard taking place on a quiet Saturday afternoon. Six rooms were each filled with an Xbox One console, students munching on pizza, drinking Monster Energy drinks and playing video games in order to raise money for a scholarship to assist a sport management major with financial needs.

The Association of Diversity in Sports was holding its sixth annual UGames tournament to raise money for the Kristian J. Rose Memorial Scholarship on  Dec. 3.

The event featured four tournaments for four sports games that participants could compete in., including FIFA 17, NHL 17, Madden 17, and NBA 2K17.

“It feels great to bring people together to have fun and play games while raising money for this scholarship,” said Ben Pereira, senior sport management major and vice president of ADS.

ADS, an organization that embraces fostering racial and sexual diversity in sports in order to create an inclusive environment, are on their sixth year of their annual tournament.

The organization hosts career fairs and the ADS Sports Talk Series, an annual panel that discusses polarizing issues and concerns in sports.

The event garnered 46 competing participants. From the participants, ADS raised $200 in this year’s event.

The fundraiser event was sponsored by Bueno Y Sano, which donated $150 off the bat, Sunset Grill and Pizza, which provided pizza for the event and Monster Energy Drinks, which provided free energy drinks.

Pereira also explained that the event provided experience for newer members of ADS to run future events, like the Sports Talk Series.

Ivan Abi-Elias, freshman pre-med and psychology major, competed in the FIFA tournament and won the first round of the competition.

“I’m pretty lucky with how the game sort of goes my way a lot of times,” Abi-Elias said. “I’m good at manipulating the game’s mechanics into my favor and knowing what works and what doesn’t.”

Brandeis University student Richard Prou, a senior biology major, learned about the event through one of his friend who’s a member of the ADS executive board. He competed in the NHL 17 tournament.

“I know [the entry cost] is for a scholarship, that’s one of the reasons why I decided to play,” Prou said. “I do have homework to do, but then I decided it’s a good cause so I might as well try it.”

“It’s been a very successful day today,” said Alan Sharp, a junior sport management and journalism major and one of the event coordinators. Sharp also competed in the NHL tournament. “This whole event is about fun and everybody getting the chance to destress before finals and have a good time, hang out with their friends, have some trash talk and some fun.”

Sharp hopes that the event could expand in the coming years in order to raise more money for the scholarship.

“I want [the event] to get bigger,” Sharp said. “I’m satisfied with it being the same as last year, as far as attendance, but I wish we could’ve gotten closer to 100.”

“I destroyed everyone, so I wasn’t surprised that I won,” said Marvin Balan, a senior economics major and winner of the NBA 2K17 tournament.

“I was pretty nervous for the game,” said Jihwan Yoon, a sophomore sport management major and winner of the FIFA tournament. “I didn’t think I was going to win it because my roommate is also in it and he’s a lot better than me so I thought he was going to win. I came in expecting to play one game and just leaving.”

“I think it’s a unique event that can draw more people,” Yoon said. “So I’m hoping people will spread the word and next year [will be] even bigger or even get something in the spring.”

Yoon hopes to return and defend his title.