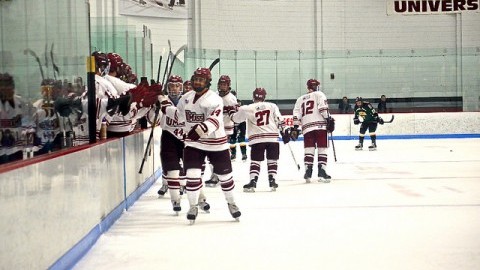 The Massachusetts club hockey team faced a tough weekend with three games in as many days, finishing the weekend going 1-1-1.

“We had three games. We should have won against UVM, then we played Bryant and lost to them, we played holy cross won …We should have gone 3-0,” said head coach Mike DeFazio.

On Sunday, UMass got started early on Holy Cross, scoring seven minutes into the game off the stick of senior captain Casey Litwack to give them an early 1-0 lead, as the Minutemen topped the Crusaders 4-1.

In the second period, the Minutemen scored again when sophomore Cam Fisher went top shelf, giving them a 2-0 lead.

UMass put the nail on the Crusaders’ coffin when they scored six minutes into the third period when Litwack scored his second of the game to put it up 3-0.

After Holy Cross scored with under 15 minutes left in the third period, Artie Potter kept the Minutemen rolling when he scored his second goal of the weekend with 12 minutes to go in regulation.

“He’s been great on this team, he’s been on a roll,” DeFazio said of Potter. “Every time he gets the puck on his stick, I just feel like something’s going to happen. He’ll get a shot on net, make a pass, he does all of the little things right.”

On Saturday, the Minutemen got on the bus and drove over two hours to Smithfield, Rhode Island to take on the Bryant Bulldogs. The yeo teams got started early when sophomore Eddy Friedman scored with 16:30 left in the first period, but that would be all for the Minutemen until the third period as UMass fell 3-2 against the Bulldogs.

Bryant scored with 6:54 left in the first period and scored again with 15:45 left in the second period when UMass turned the puck over in its own zone and Bulldogs took a 2-1 lead.

“The game against Bryant wasn’t the officiating,” DeFazio said. “It was bad penalties at bad times … We took some stupid penalties. It wasn’t the refs faults, something we need to fix as coaches.”

After senior Shane Dowd was called for a crosscheck with 16:20 left in the third period, the Bulldogs took advantage a minute into the power play and took a 3-1 lead.

With 5:58 left in regulation, senior Adam Kmetz scored a shorthanded goal to cut the Bulldogs lead to one.

That would be all the Minutemen could muster Saturday.

With two minutes left in the third period and UMass leading 3-2, UVM pulled its goalie to give them a man-advantage and a minute later with 1:03 on the clock, the Catamounts called a timeout.

With 27 seconds left in regulation, however, UVM tied the game at three apiece and after five minutes of overtime, the game finished at a 3-3 tie.

“Not entirely sure what happened, it was a lot of travel,” DeFazio said. “We did go to UVM. We drove three hours and drove home. We had our chances to win we just couldn’t pull it off.”

Late in the first period, UMass struck first on a goal by Potter to put the Minutemen ahead 1-0, but UVM came right back and scored one to knot it at one.

Coming into this weekend, the Minutemen face, according to DeFazio, their toughest opponents all season when they take on Rensselaer Polytechnic Institute Friday and Sienna Saturday.

What DeFazio says they need to work on most is teamwork, citing the team’s individual-ness as the thing that has held them back from some big wins this season.

“We have a big weekend this weekend. I wish we had more time to prepare practice wise, it’s just we need to refocus and take this game by game and start working as a unit,” DeFazio said. “There was a lot of individual play … Wednesday is a positive practice to put last week behind us.”