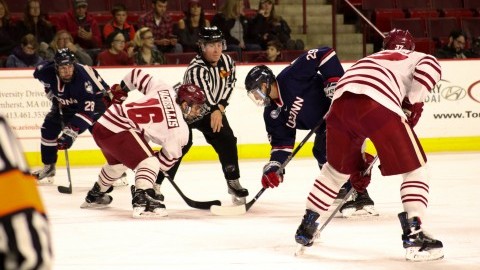 The Massachusetts hockey team has performed better on the road this season than it has inside the Mullins Center. UMass has posted a 1-1-0 record in Hockey East games on the road, with an opportunity to exceed the .500 mark Friday night in Connecticut when the Minutemen take on the Huskies at the XL Center.

UMass has performed better on the ice over the last couple of weeks. The Minutemen are 1-2-1 dating back to the Friendship Four in Ireland but have managed to increase their shot totals and get more pucks on net. In the four-game stretch, UMass has tallied just over 29 shots per game in comparison to its season average of 24.2.

Consistency along the offensive end has still been a problem in terms of manufacturing goals. The Minutemen scored nine goals in the four game stretch – a dip in their season average of 2.4 goals per game compared to the 3.4 goals allowed per game on the other end even though the shot totals increased.

Finding a way to break through and score, whether on the power play or not, is always of chief importance.

“The power play scored three goals on Friday night, and we need our power play to produce goals,” UMass coach Greg Carvel said. “I didn’t think our power play was nearly as good Saturday night. We also scored on Friday night by driving to the net hard, and that’s something we’ve really tried to focus on. We want to play bigger, harder and heavier around the net and get more goals.”

“Teams play defense so well now unfortunately that’s how a lot of goals are scored now; you don’t get a whole lot of pretty ones. It’s a mindset and it’s something we’ve got a long way to go on.”

The Huskies enter play scoring 2.8 goals per game through 17 games in the 2016-17 season with 28.4 shots per game. Whichever goalie is between the pipes on Friday, whether it be Ryan Wischow (2.60 goals against average, .909 save-percentage) or Nic Renyard (4.20 GAA, .888 percent), they’ll be tasked with slowing down UConn’s hottest players – Tage Thompson (10 goals, eight assists) and Maxim Letunov (four goals, nine assists).

“I remember they fore checked us pretty well, and we’ve got to be ready for a heavy fore check,” Carvel said. “They also have one of the few individuals that can really be a real difference maker: Tage Thompson. Watching them play Lowell last week they looked really good. I was telling our team, I think we’re a better team than we were last time we played them, but they are definitely a better team than we faced last time as well. They looked like they were really competing and really managing the puck well.”

UMass will do its best to try and break through against either Rob Nichols (2.56 GAA, .911 percent) or Adam Huska (2.71 GAA, .923 percent). Huska allowed the two goals scored last time these two teams played.

Puck drop from Hartford, Connecticut is set for 6:30 p.m. Friday.