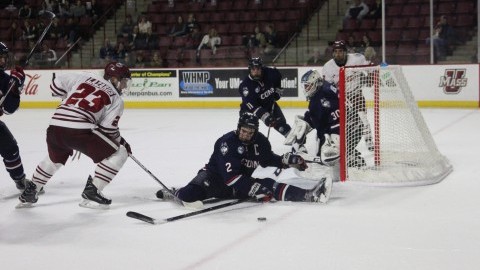 When the Massachusetts hockey team met Connecticut for the first time this season Nov. 4, it was clear the two teams mirrored each other in many ways, and that was further drilled home by the end result of a 2-2 tie.

In that game, UMass (4-8-2, 2-6-1 Hockey East Association) managed to get two goals past UConn goaltender Adam Huska, who currently ranks third in the conference in save percentage (.923) among 13 qualifying goaltenders that have played at least 40 percent of their team’s minutes in net.

What makes UConn’s (5-6-6, 3-3-2 HEA) goalie situation interesting is that it is the only team in the Hockey East that has two goaltenders that qualify to be statistically ranked, meaning its two goalies have split time in net almost evenly.

Huska splits time with senior Rob Nichols, who poses a 2-3-3 record through eight games and a save percentage of .911.

While it may appear that the unpredictability in net might present a challenge to the Minutemen this Friday, UMass coach Greg Carvel and his team aren’t concerning themselves too much with who’s in net.

“I really don’t view goaltenders as a challenge,” Carvel said. “The elite goalies are going to steal games, but I don’t know if we’ve played a game yet this year where the goalie has stolen the game on either side.”

It took the Minutemen just over 33 minutes to put the puck past Huska the last time these two teams faced one another, and he did manage to steal a game on the road against Notre Dame stopping 47-of-49 shots on goal in a 4-2 win over the Irish Oct. 27.

While Huska’s record comes off as a bit pedestrian in the nine games he has played for the Huskies (3-3-3), he is one of six goalies in the conference already drafted to an NHL team.

“I know he’s got that reputation and he’s stolen a few games for them,” Carvel said. “But at the end of the day I don’t think that the goalie has really made a difference in any of our games.”

What will undoubtedly impact the result of Friday’s rematch will be how the UMass offense fairs against UConn’s defense with either Huska or Nichols.

The Huskies are one of the few teams that have already seen the Minutemen’s starting forward line at full strength this season, with senior Ray Pigozzi fully healthy. Before missing five games following the tie against the Huskies, Pigozzi managed to score an assist (his second of the season) against UConn.

Similar to Carvel, Pigozzi does not see the ambiguity in the Huskies’ net as impactful on the offensive game plan.

“When it comes to goaltending, it doesn’t make a huge difference” Pigozzi said. “You always look at tendencies that are small: height, where to shoot, high or low. I don’t think that’s much of our game plan. We’re more focused on getting pucks to the net no matter who’s in net.”

With Pigozzi back in the line up over the weekend, the UMass offense erupted Friday night against Notre Dame for a season-high five goals, only to be shut out the next game for the first time this season.

Despite the inconsistent play over the weekend, the overall play of the Minutemen has improved over the past couple of weeks. According to team captain Steven Iacobellis, UMass’ growth won’t be stymied by whom UConn places in net.

“It’s not something we really focus on, but we’re focusing on their systems and I think no matter who’s in net, our game plan is going to stay the same,” Iacobellis said. “The focus is going to be getting pucks on net.”

This mentality has served the Minutemen well as of late, and now they will need it on the road against a conference rival this Friday.