UMass men’s basketball falls in A-10 opener to St. Bonaventure and its veteran backcourt 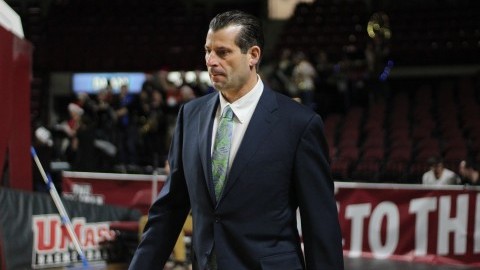 After winning 10 of its 13 games in non-conference play, the Massachusetts men’s basketball team was given a harsh dose of reality Friday afternoon.

By the time the clock struck triple zeroes, UMass coach Derek Kellogg had long ditched his sport coat and tie. The combination of Jaylen Adams and Matt Mobley torched the Minutemen for 52 points and well-rested St. Bonaventure controlled the game from the opening tip cruising to an 89-77 victory at Mullins Center in the Atlantic 10 opener.

“I think that was one of those street fight, Atlantic 10 opening night games,” Kellogg said. “I think it was a little bit of a wake up call for some of the guys that hadn’t been through that before about how rough and physical those games can be.”

Adams finished with 29 points (19 in the first half) on 9-of-15 shooting, while also grabbing five rebounds. Mobley added 23 points and four rebounds for SBU.

“I thought St. Bonaventure came in here ready to play and had a great game from Jaylen Adams and Mobley, but I thought there were other guys that played their roles very well and did a good job to come away with a win,” Kellogg said.

Tempers flared with 7:29 remaining in the first half after Josh Ayeni and Brison Gresham got in each other’s face after Ayeni was called for a common foul.

Ayeni then took a swing at Greshman, who appeared to have swung back, but was held back from his teammates and was too far away to make contact.

Both players received a double-flagrant technical foul and were ejected from the game.

“I thought the Brison double-ejection was the biggest play of the game, honestly,” Kellogg said.

“We kind of had momentum going and I was in the huddle saying ‘we’re going to get two free throws and the ball and this is what’s going to happen,’ then the next thing I know, they’re both thrown out and we just get the ball. I thought that that hurt us.”

SBU coach Mark Schmidt also wasn’t happy with the altercation. Prior to the incident, Ayeni had eight points in seven minutes on a perfect 4-for-4 shooting clip.”

“It was disappointing” Schmidt said. “You have two freshmen that lost their minds a little bit.”

UMass’ only lead came after a 9-2 run that started at 11:46 of the first half that forced Schmidt to take a timeout. On the following possession, Adams hit one of his four 3-pointers to give the Bonnies a 21-19 lead they wouldn’t surrender.

“These conference games, they’re bigger than non-conference games so every game you just have to bring it,” said DeJon Jarreau, who added 13 points. “You can’t take no plays off.”

Donte Clark led the Minutemen with 19 points, while Rashaan Holloway followed behind with 15.

Forward Malik Hines left the game with an ankle injury with 17:06 remaining in the first half to trim UMass’ frontcourt depth. Kellogg said he wasn’t sure the extent of the injury, but thinks it’s just a bad sprain.

With the Minutemen off until next Wednesday when they travel George Mason, Kellogg said Hines will be day-to-day, barring anything more serious after further examination.

In 12 minutes off the bench, Chris Baldwin added nine points and nine rebounds in his best performance of the season.

Fifty-eight total fouls were called in Friday’s game, as the Bonnies shot an impressive 33-of-38 (86.8 percent) from the free throw line, while UMass shot 20-for-28.

“We put them to the free throw line every time it seemed,” Kellogg said. “When you’re in the press, you can’t grab a guy or whatever you want to call it and then they march down and shoot two free throws without having to work for it I thought that was pretty big for them; that happened about six or seven times, especially in the second half.”

According to Jarreau, the Minutemen need to focus their attention on defense with a difficult stretch of games coming up against the Patriots, Virginia Commonwealth, Dayton and Rhode Island.

“I felt that we didn’t play bad, we just didn’t play defense,” Jarreau said. “We scored 77 points, but they scored 89, so we just have to get in the lab and just work on defense and work on pick-and-roll defense.”