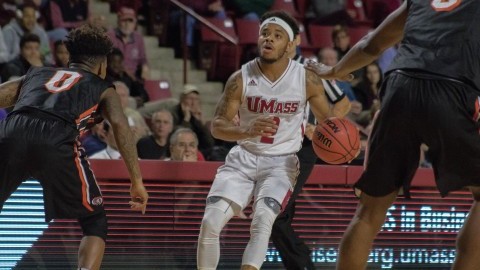 There’s no hiding that the Massachusetts men’s basketball team’s matchup against North Carolina A&T Tuesday night at Mullins Center won’t be its most difficult task of the season.

The Aggies (1-7) visit UMass in the second game of the Gotham Classic having lost their last seven games with an RPI ranking of 331 out of 351 total Division I basketball teams.

N.C. A&T’s lone win of the season came in its season opener on Nov. 11, where it beat Division III Greensboro College 67-50. For what it’s worth, Greensboro College’s enrollment was 1,000 students for the 2015-16 school year.

Given the quick turnaround and limited practice time following the loss to Providence Saturday, the Minutemen (6-3) are using Tuesday’s game as a way correct their own mistakes and focus on their individual issues with only four games left before the Atlantic 10 schedule begins.

“Really we’re just focused on us rather than who our opponent is,” guard Zach Lewis said. “Just having so many guys and having so many moving pieces at one time that we have to focus on us and make sure our stuff is correct before we worry about [opponents].”

“At most junctures right now, I’m worried less about opponents than us, and improving,” UMass coach Derek Kellogg said. “I think we’ve kind of zeroed in on a few areas where we need to get better. Some of it’s as easy as let’s go shoot free throws. Imagine that? Let’s go shoot free throws and make them. Let’s shoot open jump shots and and make layups.”

Kellogg added: “Some of it is just decisions where I think as guys get older and keep playing at that level will make that decision more and more as the year goes on.”

Aggies guard Sam Hunt and forward Davaris McGowens are the two players the Minutemen will likely feature on their scouting report. Hunt leads the team in scoring averaging 13.6 points per game, while McGowens follows close behind with 10.5 ppg to go along with his team-leading 7.4 rebounds per game.

“They have some spirtability on offense because they shoot a lot of threes,” Kellogg said. “They play some three-guard lineups. They’ll mix in some zone and man. They’re a team you just want to stay on and cover them up for 40 minutes and not really have an opportunity to get going because, like any team, if they start making some threes and get comfortable and feel good, then all of a sudden you’re in a ball game and in a battle.”

Lewis added: “They’re a tough, scrappy team. We’re expecting them to come in here and give it their all.”

The Minutemen have two more games remaining in the Gotham Classic, as they will face Kennesaw State Saturday and Rider Dec. 22.

Despite the lack of wins or consistent play N.C. A&T has shown this season, Kellogg and Luwane Pipkins still aren’t taking Tuesday’s contest against the Aggies lightly, nor are they overlooking any opponent on UMass’ schedule.

“[You have to] make sure you play the exact same way you play whether it’s Providence, North Carolina A&T, Pacific, whoever it may be,” Kellogg said. “You have to come out in the mindset of playing good, team UMass basketball.”