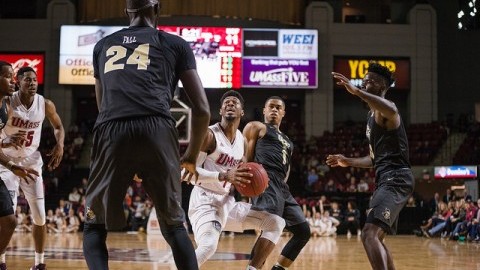 For many of the Minutemen, Saturday’s 65-62 loss to UCF just simply wasn’t their day. With the exception of Ty Flowers, UMass (5-2) only made four of its 28 attempted 3-pointers. The shooting-friendly Minutemen put up 72 shots – 30 more than the Knights – yet only hit 25 of them.

“I thought we played plenty hard enough to win, we just didn’t come up with some plays, more on the offensive end on the floor,” UMass coach Derek Kellogg said. “I thought going 10-for-38 from 3 is probably a pretty tough number to win, and then 2-for-9 from the free throw line. It’s kinda like we go 2-for-9 then Tacko (Fall) goes 3-for-5 when he’s shooting 27 percent.”

However despite all the moments where the Minutemen couldn’t seem to make a shot, UMass still had a chance to walk away with a victory with 13 seconds left on the clock.

Donte Clark, who made his first basket with 12 minutes and 15 seconds into the second half, hit a right-corner 3 that bounced between the backboard and the rim before falling in.

With the clock winding down, Nick Banyard collected an offensive rebound and hit a 3-pointer with 0.8 seconds remaining to give the Knights (6-1) the final lead of the game.

There was no shortage of opportunities for the Minutemen who forced UCF to commit a season high 20 turnovers. UMass just simply could not convert.

“Man, I don’t know how many good looks you can get in the press after you turn them over or good plays,” Kellogg said. “Other than the start of the second half, I thought our offense was decent; we just didn’t make those baskets.”

Luwane Pipkins, though he lead the defensive effort with seven steals, shot 7-22 and made only two of his twelve attempted threes. The freshman guard leads the team in shots with 88, but has only made 27 of them (30 percent).

“Shoot ‘til I hit, shoot ‘til I miss,” Pipkins said. “I shot 2-for-12 which is terrible. I’m a shooter, so I’m going to shoot the ball, no matter how many shots I take. DK told me that was too many shots, so I guess I have to learn from that, but at the end of the day we lost.”

Pipkins is not the only one. The Minutemen’s poor shooting performance against the Knight is a part of a larger team problem that has gone on for the past few games.

“(Pipkins) shot himself somewhere,” Kellogg said. “I’m not sure if he shot himself out of (a slump), but he took enough. It’s funny because every time him, (Zach Lewis), Ty and Donte and those guys raise up, I think it’s going in and I’m surprised when we shoot the way we shot, really the last three games. It’s not like it was just today, it’s been a couple games now. It could be legs, it could be we need to shoot more, shoot less, press more, I’m not sure.”

Clark believes the remedy is to just keep shooting.

Though much of the team struggled making their shots, Flowers excelled, playing the best game of his career.

A 20-point performance that included six made 3-pointers and was complimented by nine total rebounds, Kellogg praised his attitude.

“It’s like a lot of guys, his attitude has been really good,” Kellogg said. “And I think attitude goes into to how you play. Just having a good attitude and then when you get nine rebounds and you’re on the front of the press and play good, hard defense, you stop worrying about making shots. I thought he did an excellent job of that.”

Defensively Kellogg was pleased. On top of the 15 steals and 20 force turnovers, the Minutemen limited UCF’s 7-foot-6 center, Tacko Fall, to one offensive rebound.

“Listen, I’ll say it again, defensively we did great stuff tonight. Luwane had seven steals, we turned them over 20 times, 15 steals, open floor plays, we just have to get better in the game of basketball when the game gets moving.”