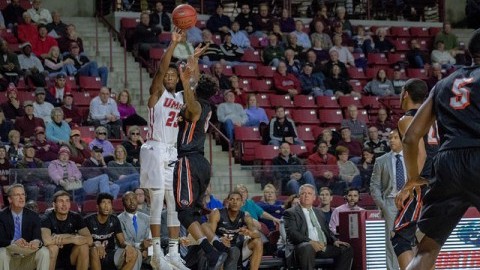 The Massachusetts men’s basketball team has lived and died by the 3-pointer this season. Each half of the Minutemen’s 72-48 win over Pacific told a different side of that story.

In the first half they showed much of the same. Keeping the ball on the perimeter and chucking up the 3 with or without a hand their face. At the half, the result was the same as it has been. UMass (6-2) were 8-22 from beyond the 3-point line making up a majority of their 30 first half shots.

A 10-point run started by a couple of made threes from C.J. Anderson and Ty Flowers and finished off with four points in the paint from Malik Hines allowed the Minutemen to head into locker room up by five despite their miscues throughout the half.

“I had a different vision when I was dreaming about it,” UMass coach Derek Kellogg said of his team shooting their way out of a slump. “Yea they were just rushed, quite a few of them. The ball wasn’t even hitting the guy’s hand and it was already shot at the basket.”

After hitting two of his first three 3-point attempts, Luwane Pipkins’ hand went cold and he missed his next three.

The Minutemen experienced a similar situation last game against Central Florida where they made only five of their 22 attempted 3-point shots.

However unlike against UCF, the Minutemen collected themselves following halftime and were able to shoot from beyond the arc more efficiently.

UMass was 6-14 in 3-point shooting, converting 42.9 percent of its shots. This number is not completely reflective though of their shooting efficiency given that some of the shots came towards the end of the half when the result of the game was no longer in doubt.

“Yea and the shots were just better especially on offense,” Kellogg said of his team’s second half performance. “I thought even Seth (Berger) knocking down a couple of jumpers there and making our free throws. Just a little bit of the finer points of the game that you can just preaching and talking about in practice and even at halftime I thought those were big, when they come out and execute and do those things.”

Three consecutive 3’s to start the second half gave UMass a comfortable lead that they wouldn’t let up for the remainder of the night.

In recent games, most notably against Knights, the Minutemen’s failure to make shots has resulted in their ultimate defeat. After going 11-34 from the field in the first half game against UCF, UMass shot equally as bad in the second half converting only 14 of 38 shots.

Granted, Pacific is not quite at the level that UCF is at, the Minutemen still showed signs of maturity and composure that may have been lacking against the Knights.

The maturity showed in guard DeJon Jarreau who is trying to regain his conditioning after missing two weeks due to an inflamed callous on his foot. Jarreau spoke of his desire as a point guard to build a connection with his big men.

“I’m getting connections with all the big men and that’s a good thing because most of the time I have the ball in my hands,” Jarreau said. “So I’ve got to distribute it throughout the whole team.”

UMass spread out their 3-point attempts across many of their players, giving more than just a few guys a chance to get hot.

Five different Minutemen converted more than one 3-pointer. Kellogg expressed the confidence he had in his bench to provide a spark.

“Even to start the game, our so-called starting group didn’t perform per se or didn’t get the lead and I subbed C.J., Zach Lewis and Malik in pretty quickly,” Kellogg said. “They gave us a nice boost and I think Ty was in that run. They gave us a nice boost, let a couple guys on the bench see the action and get comfortable and then they came back in and played better.”