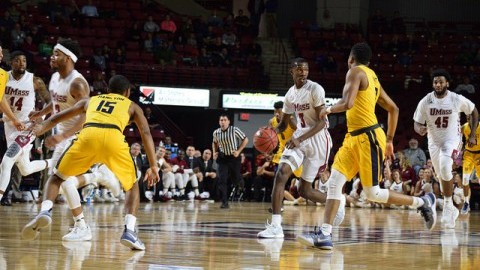 While the Massachusetts men’s basketball team may want to erase Tuesday night’s performance from its memory and burn all game film, it’s one that both the Minutemen and its upcoming opponents will make note of for the remainder of the season.

UMass (7-3) once again struggled against the 2-3 zone and in half-court sets for the majority of its 65-59 win against North Carolina A&T, as the Minutemen didn’t hold a lead until almost 34 minutes into the game.

The Aggies (1-8) entered Tuesday’s contest having lost their last seven games with an RPI rank of 330 out of 351 teams, and a lead at the 34:11 mark before a Luwane Pipkins 3-pointer gave UMass a 55-53 lead it would not surrender for the remainder of the game.

“The way the games are being called a lot of teams are saying we’re going to play zone,” Minutemen coach Derek Kellogg said. “I think if you look at our 3-point percentages, teams are going to sit in the zone.”

N.C. A&T sat back and played its zone defense as UMass struggled to shoot from outside. The Minutemen missed its first 12 and started 3-pointers before DeJon Jarreau sank a corner 3 with 4:41 remaining in the first half.

The Minutemen started the game 1 of 14 from long range, while ending the game with a 6-for-25 clip. Donte Clark, who scored a game-high 22 points, was the only UMass player with more than one made 3-pointer on the night.

“Well, I’m getting a little concerned I would say about the [3-point] percentages and the free throw line,” Kellogg said.

Outside of Clark’s 3-for-5 mark from deep, the rest of the Minutemen shot just 3-for-20 (15 percent). Zach Lewis went 1-for-7, Pipkins 1-for-6 while Jarreau made one of his four attempts.

“If we ain’t scoring then I don’t think people are going to play defense so it helps out to make shots,” Clark said.

Prior to a 19-2 run that brought the Minutemen’s deficit within one heading into halftime, much of their limited success came when they were attacking the paint with Rashaan Holloway and Malik Hines.

During the under-12 media timeout with UMass trailing 20-3, Kellogg’s message to the Minutemen was simple.

“We needed to get the ball inside,” Kellogg said of his message during the timeout. “I mean, it almost looked like we were so wide open that guys got really apprehensive and almost like, I don’t know if nervous is the right word, but kind of like I don’t want to shoot that ball.”

“So at that point, I said let’s get it inside, let’s try to get some paint touches.”

C.J. Anderson, who scored nine points off the bench, also harped the importance of getting the ball to UMass’ frontcourt when perimeter shots aren’t falling.

“I would say just pack it inside and attack the rim,” Anderson said. “We try to get into transition as much as we can. Once we get to the rim, the shots are going to fall. Rashaan starting hitting inside and we packed it in the paint.”

The Minutemen have now seen their last three opponents (Pacific, Providence and N.C. A&T) all slowed down the tempo by defending UMass with various zones.

But given how poorly the Minutemen have shot this season, does Kellogg expect more zone looks moving forward?

“I would assume a lot of teams would play zone until we get to league because I think in league those teams are defined in who they are,” Kellogg said. “They’re not trying to kind of just win a game. They’re saying this is who we are, this is how we play and this is what we do.”

Kellogg does, however, believe the shots from the perimeter are coming in UMass’ future.

“We’re going to make those. I’m telling you,” he said. “We are going to start shooting the ball better. I’m going to have great karma, good energy and everyone’s going to pray. They’re going to all go in … and the free throws.”