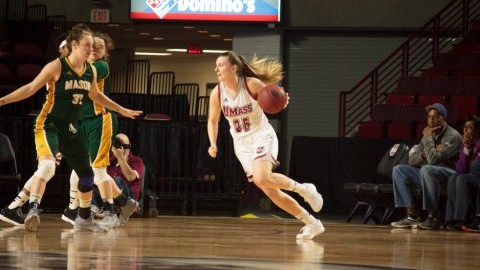 Through the first half of play on Wednesday, the Massachusetts women’s basketball team appeared set for a competitive game and a possible win for coach Tory Verdi’s birthday, trailing Drexel by 5 points after 20 minutes, but showing a better compete level than its previous game.

That did not happen.

Instead, the Dragons closed out the third quarter with an 11-2 run and outscored UMass 33-20 in the second half to hand the Minutewomen their second loss in as many days at the FIU Holiday Classic, losing 65-47.

Verdi was pleased with UMass’ (6-8, 0-1 Atlantic 10) play compared to the day before against host Florida International, but felt the team’s shooting woes in the third quarter contributed to some breakdowns defensively, allowing Drexel (9-2) to run away with the game in the final 20 minutes.

“I thought we came out with a sense of urgency, played a lot better than yesterday, so I was happy with that,” Verdi said. “Then I thought that our inability to score in the third period hurt us, we scored nine points in the period, then we kind of gave up on the defensive end because we weren’t knocking down shots on the offensive end, and we’ve got to do a better job in that area.”

Defending the 3-pointer has troubled the Minutewomen all season long, and the Dragons, a team that relies heavily on the long ball, took full advantage. Entering the week, only seven of the 344 Division I women’s college basketball teams had allowed more 3-pointers to the opposition than UMass.

That trend continued against Drexel as the Dragons converted 12 times from beyond the arc, good for over half of their points on the day. Although Drexel shot at just a 32 percent clip from long range, it had the luxury of putting up a lot of shots because of the Minutewomen’s turnover struggles.

UMass turned the ball over 19 times leading to 22 points for the Dragons, something which Verdi said greatly impacted the outcome of the game.

“It impacted us a lot. They had 22 point of turnovers, and this is a team that doesn’t press, so that’s frustrating to watch. We have some players who are averaging, four turnovers, five turnovers a game. That’s too many, take care of the basketball,” Verdi said.

Through the first 14 games the Minutewomen’s leading scorer freshman Hailey Leidel also leads the team in turnovers with 50, while fellow starter junior Leah McDerment trails her teammate by one turnover.

Leidel contributed to both categories against Drexel, leading the team with 19 points, but also turning the ball over four times, second-most on the team.

Junior Maggie Mulligan added her A-10-leading 10th double double of the season, tallying 15 points and 10 rebounds, though she too had her struggles, leading UMass with five turnovers.

For the Dragons senior Sarah Curran led both teams in scoring with 20 points. Senior Jessica Pellechio was the only other Drexel player to reach double digits, scoring 14.

Verdi saw the Dragons’ balanced offensive attack as something the Minutewomen should aspire toward in future, as they go through the process of building a team under the first-year coach.

“Their starting five, they all have a skillset they can dribble, pass, and shoot, and they played really, really well, they can score a lot of points,” Verdi said. “They don’t have a weakness offensively, and that’s where we need to get as a program.”

After a 66-55 loss to George Mason back on Dec. 4 to open the A-10 schedule, UMass will now begin its conference schedule for good on Saturday with a trip to Dayton, with tipoff scheduled for 2 p.m.