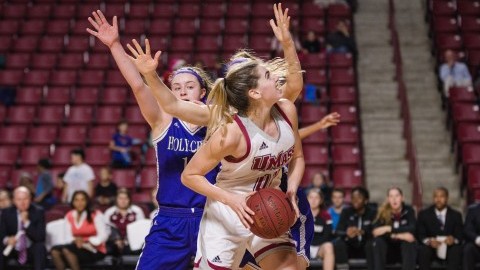 It was execution down the stretch that hurt the Massachusetts women’s basketball team in its first game of the FIU Holiday Classic. A long Leah McDerment 3-pointer missed at the buzzer, and UMass fell to tournament host Florida International 58-57 in the opener Tuesday afternoon.

In a close back-and-forth game that featured eight lead changes, three of which coming in the final four minutes of the contest, free throws became crucial. The Minutewomen struggled from the line when it mattered most as UMass shot just 8-of-17 from the charity stripe.

“It’s really tough for us in the fact that we went 8-[of]-17 from the free throw line. We have to be able to execute and we have to knock down shots from the line,” Minutewomen coach Tory Verdi said after the game. “It’s been our Achilles heel and for whatever reason we’ve been missing them. We just have to learn from this and keep moving forward.”

UMass (6-7, 0-1 Atlantic 10) had multiple chances to close out the game, but failed to do so. After a Hailey Leidel jumper that put the Minutewomen up 57-54 with one minute, 22 seconds left in the game, FIU (2-8) raced down the court and scored a layup to cut the deficit to one nine seconds later.

Leidel’s basket would be the last points for UMass on the day. Alyx Stiff missed a 3-pointer, and on the following possession gave the Panthers an extra opportunities to score after failing to secure a defensive rebound.

FIU’s Janka Hegedus converted a layup on the other end with 22 seconds remaining to put the Panthers up 58-57.

Second-chance points were a problem for the Minutewomen all game, as FIU finished with 16 second chance points compared to UMass’ nine.

“In the end, our number one key was to box out and rebound, and I think that hurt us, probably because we didn’t do that down the stretch and we gave them multiple possessions,” Verdi said. “But, we were still in position to win the game, we have to do a better job as coaches and players to make sure we execute a little better down the stretch than we did today.”

The Minutewomen had a chance to take the lead on the possession following Hegedus’ layup, but Maggie Mulligan missed a short shot that would have given them back the lead. After multiple fouls to send the Panthers to the free throw line, FIU’s Kristian Hudson missed both shots with seven seconds remaining, giving UMass one final opportunity to win the game.

McDerment got off a long 3-pointer at the buzzer, but to no avail.

“We have to do a better job of being focused from the start. I didn’t like our energy, our focus our discipline and I thought that hurt us. Regardless of that, in the end we stayed in the game, and made some plays to be up at half,” Verdi said.

UMass struggled from behind the arc throughout, going 3-for-21 from 3-point range on the day. Stiff, who is still getting back in the swing of things after missing the first nine games due to injury, went 0-for-9 from 3.

“She needs to be able to score for us,” Verdi said of Stiff. “She struggled here tonight going 0-for-9 from the 3-point line but she’s got to knock these down and she’s capable of knocking those down.”

Leidel led the way for UMass with 18 points, while Mulligan added another double-double finishing with 10 points and 16 rebounds. Guard Alexis Gordon led FIU with 17 points.

The Minutewomen will look to bounce back Wednesday, as they play their second game of the tournament against Drexel. This will be the their final game before the A-10 conference play gets into full swing.

“Every game is important,” Verdi said. “We have to look at what we didn’t do today, and we’ll look at that tonight and then we have to prep for Drexel. We have to be better tomorrow than we were today and that’s collectively.”