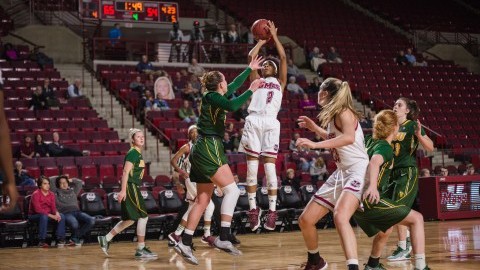 The Massachusetts women’s basketball team’s three-game winning streak came to an abrupt halt on the road Wednesday night, as it fell to the Hartford Hawks 75-56.

UMass was able to overcome a 26-point deficit to defeat Hartford last year, but were unable to dig itself out of the hole it built in the first half.

UMass did not hit a single 3-pointer and did not hold a lead in the first half.

“I don’t think we did a very good job executing both offensively and defensively,” UMass coach Tory Verdi said after the game. “Defensively especially, for whatever reason we had mental lapses where we didn’t find shooters and so forth. We dug ourselves in a hole and we have to have better focus, especially on the road.”

“We have to execute our game plan offensively and defensively, and when you do that, you put yourself in positon to win a basketball game, and we didn’t do that here tonight.”

Hartford came into the game averaging just under five threes made per game, yet made 14 against the Minutewomen. Verdi attributes this to both their execution, as well as his team’s mental lapses on defense.

“They knocked down shots and were confident,” Verdi said. “But at the same time, the fact we weren’t there on catches gave them open looks and we can’t do that. We have to make sure we do a better job in that regard but I’d say it was a combination of both.”

Hartford had a balanced scoring attack with five players scoring in double digits. Freshmen Jess Camarda led the way for the Hawks with 15 points stemming from five 3-pointers.

Ryan Holder had 19 points for UMass and Maggie Mulligan finished with 16 points and 17 rebounds, 12 coming on the offensive glass.

The Minutewomen were unable to find a rhythm offensively, looking out of sync. It would seem there was a lid on the rim, as UMass shot 32.1 percent for the game.

The Hawks employed a full-court diamond and one press that put pressure on the Minutewomen guards. Once the press was broken, Hartford fell into a 3-2 zone, and UMass struggled to get anything going.

The offense looked stagnant at times, and had trouble getting the ball into the gaps of the zone. Verdi wants to see his team execute the game plan better going forward.

Going forward, Verdi hopes to see his team have better focus during road games to prevent games like tonight from happening. He feels that his team missed a lot of opportunities to keep this game close.

“We had a game plan and we have to execute that game plan and we didn’t do that here tonight. When you don’t do those things – if two people do them and three don’t you break down. When you’re on the road, you have to be tougher, and when you face adversity you have to come together and you have to have short term memory,” Verdi said.

“Tonight, we allowed all of our misses, because we missed a ton of offensive put backs, to hurt us. You make those and it’s an additional 16 to 18 points and you feel better about yourself and work harder defensively. I think we kind of imploded.”