Use words to describe, not diminish 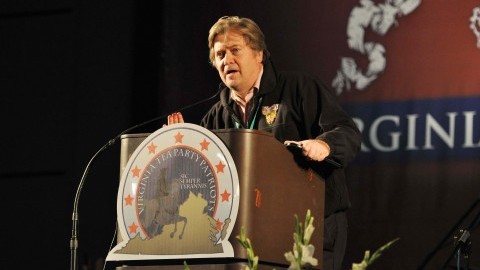 They can sway a population to vote a man with questionable morals and no political experience into the highest political office in the world.

But while politicians do not underestimate the power of words, that power was underestimated by journalists during and following this election season. The very people who should have appreciated and understood the strength of words the most instead used them to give legitimacy to outrageous claims and to minimize some of the most frightening ramifications of this election.

On Nov. 13, Donald Trump announced Stephen Bannon as his chief strategist. That day, The New York Times published an article describing Bannon as a “right-wing media provocateur” and claimed Breitbart News, the website that Bannon ran for almost a decade, produced “sometimes racist messages.” Later in the article, the Times took a stronger stance against Bannon and used the word “alt-right,” a word that, after the election, began to overwhelm news headlines and Google searches alike.

The “alt-right” is defined by Oxford dictionary as “an ideological grouping associated with extreme conservative or reactionary viewpoints, characterized by a rejection of mainstream politics and by the use of online media to disseminate deliberately controversial content.” Essentially, in using that term, journalists are stating that Bannon and his website represent an extremist fringe-group of the Republican party that makes provocative claims.

But is that enough to describe Bannon and Breitbart News?

Bannon has been quoted using derogatory and sexist terms when speaking about women, using slurs when describing people in the LGBTQ community and threatening violence against women. Bannon has also been accused of domestic violence and holding anti-Semitic beliefs. Breitbart News produces purposefully inflammatory content that Bannon has even admitted appeals to racist and anti-Semitic followers, with incendiary headlines such as “Birth control makes women unattractive and crazy” and “Roger Stone: Huma Abedin ‘Most likely a Saudi spy’ with ‘deep, inarguable connections’ to ‘global terrorist entity.’”

Calling Bannon and Breitbart News part of the “alt-right” movement does nothing but legitimize their beliefs and minimize the extent of their claims. Bannon and Breitbart do more than hold “extreme conservative or reactionary viewpoints,” they bully, condescend and preach hatred.

On Nov. 28, the Vice President for Standards of the Associated Press, John Daniszewski, wrote a statement discouraging journalists from using the term “alt-right,” claiming that the term “may exist primarily as a public-relations device to make its supporters’ actual beliefs less clear and more acceptable to a broader audience,” and additionally stated, “In the past we have called such beliefs racist, neo-Nazi or white supremacist.”

While refraining from using the term is a positive step forward in delegitimizing the hateful rhetoric of Bannon and Breitbart News, it is Daniszewski’s second statement that I find to be more compelling. Is Bannon a “provocateur” as the Times claimed? Yes. But he is also man that gives a voice to people with racist, xenophobic, sexist, homophobic and anti-Semitic ideals. Does Breitbart News publish “sometimes racist messages?” Yes. But they publish sexist, anti-Semitic and homophobic messages as well. Is Bannon part of the ‘alt-right?’ Yes. But using that vague and confusing term that not many people are familiar with diminishes the hateful values of that group and the implications of their sudden rise to power.

It is the job of journalists to educate the public about issues relevant to them and their ability to self-govern and act as a counter-balance to the potential abuses of the government, and they must tell the news in a way that is accurate and truthful. As a watchdog for the people, they can no longer underestimate the power of their words. Using the term “alt-right” to describe the ideals of the president-elect’s future chief strategist is simply an incomplete truth. Call Bannon out on his frightening comments and hateful rhetoric, and refuse to minimize the issue of his newfound power.