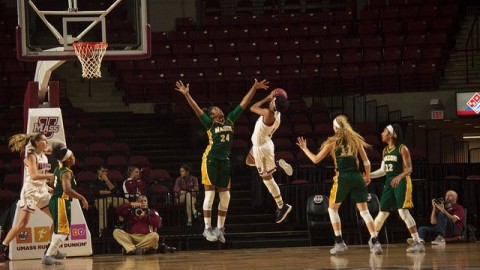 The Massachusetts women’s basketball team looks to snap its first two-game losing streak of the season when it takes on Hofstra Wednesday in Long Island, NY.

The Minutewomen (4-4, 0-1 Atlantic 10) recently lost their six-game winning streak at home to their first conference opponent of the season George Mason this past Sunday in a 66-55 loss. A poor first half performance subjected UMass to play catch-up for the rest of the game, despite outscoring the Patriots in the final quarter.

“Regardless if it’s an A-10 game or a non-conference game, you’ve got to show up and you’ve got to play for all 40 minutes,” Minutewomen coach Tory Verdi said. “Our players understand that when you turn over the ball 20-plus times, you’re not going to win many basketball games.”

Hofstra (4-3) has alternated wins and losses for seven games. The Lions head into Wednesday’s game coming off their largest margin of defeat this season in falling to Buffalo 74-50. Hofstra shot just 4-13 behind the arc and couldn’t handle Buffalo’s strong fourth quarter presence, being outscored 12-27.

Junior captain Maggie Mulligan is leading both the A-10 and the NCAA this season with seven consecutive double-doubles. Her latest stat-sheet against the Patriots included 11 points, 12 rebounds and tied a career-high five blocked shots.

“The mindset is to control the controllable,” Mulligan said. “Just do the little things.”

Mulligan also leads the A-10 in rebounding and blocked shots, ranking third nationally with an average of 12.4 rebounds and 2.4 blocks a game.

“[Maggie] has been very vital and that’s something that we need from her each and every single night,” Verdi said. “There are no nights off for anybody on this team.”

UMass has outscored their opponents in the paint every single game this season, except in their 75-56 loss to Hartford last Wednesday. Such a strategy stems from Verdi’s belief in attacking the basket.

“My whole philosophy going into this season, is to attack the basket,” Verdi said. “We’ve got to compete regardless of who’s on the floor, who’s not on the floor, no excuses.”

Verdi made a point to say that his team knows that how many players they have eligible to play is not an excuse. Regardless of how many players are sitting on the bench, it’s the team’s job to “go out there and win basketball games.”

“We can’t feel sorry for ourselves,” Verdi said.

Mulligan claims the goal for the team is to get a winning streak going again and to forget about its recent losses.

“[We] have short term memory and keep moving on,” Mulligan said.