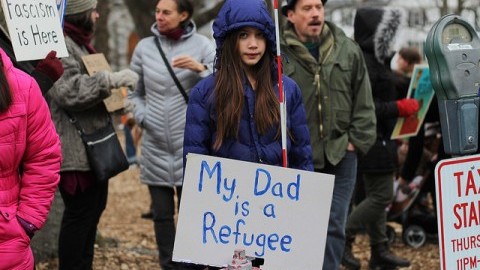 People gather on the lawn in Amherst town center to protest the recent immigration ban and other political injustices. Caroline O'Connor/Daily Collegian)

Protestors held up signs that read, “Let our friend back. He is just a student following a dream #StudentsAreNotTerrorists,” “Stand against hatred” and “True peace is not merely the absence of tension; it is the presence of justice.”

“I think everybody is out today, in particular, because of this ban on Muslim people and Muslim countries,” Denise Beaudet, a global art and activism campaigner for Roots to Resistance said. “A lot of people went to Bradley Airport today. It was a big, big protest. Anyone who couldn’t make it there I think came here.”

“I have to pick and choose, because there’s a lot of issues right now with this administration,” said Susan Buckland, an Amherst resident who was granted citizenship in July of 2011. “A couple are really close to my heart. One is the immigration issues. I was allowed citizenship in 2011. Had I been a Muslim today, I would not be here and I’ve lived here most of my life. [The executive order] is wrong, that’s a criminal offense as far as I’m concerned.”

Shmuel Pernicone, a Hampshire College student, was one of many who decided to join in the protest while passing by.

“I was just getting books for a class at Amherst Books and I saw [the protest] going on,” Pernicone said. “I don’t have a sign or anything, but I just wanted to stop by and lend my extra body count. It’s not much, but I’m really pissed about everything that’s going on.”

Milad Nasr, a computer science Ph.D. student at UMass who attended the protest with some friends said, “We are all Iranian and this is the protest against the Muslim ban. There’s a group on Facebook and we found out that there was an event today and came here.”

“I had heard that this was in solidary with the march in Boston, and it wasn’t possible [for me] to go there, but I’m really distraught at the turn our country has taken,” Marylou Sullivan, an Amherst resident said. “I’m almost incredulous, and to turn people away at the airport who’ve already been vetted, to send people away who have credentials to be here…I do know of some personal stories and then I realize the magnitude.”

She added: “These are the stories I know, but the magnitude of the stories that I don’t know…it’s so huge. I don’t really know how else to fight other than standing up and speaking up.”

A petition to make the town of Amherst a sanctuary city was passed around to the people involved in the protest. The petition began with, “We the undersigned stand committed to creating a welcoming, safe, inclusive and hate-free community. We stand against the politics of hate that seek to divide us and redouble our commitment to the values of freedom, justice and equality that bind us as a community…”

Throughout the protest chants of, “Love, not hate. We do not discriminate,” “Hey hey, ho ho, Donald Trump has got to go,” and “No hate, no fear. Immigrants are welcome here” rang out.