Hardly anything in ‘Rogue One’ scores a direct hit 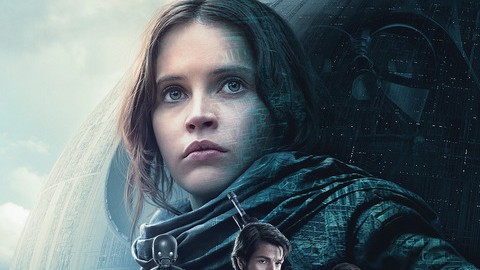 Lightsabers! AT-ATs! Darth Vader! That pig-man and his scrotum-faced friend from Mos Eisley! “I’ve got a bad feeling about this!” Those are phrases and words you all recognize, right? They’re familiar, yet they’ve been placed in a new setting, which automatically makes them good!

This logic, much like that used by “The Force Awakens” before it, is that if “Rogue One” cannibalizes enough iconography from the previous “Star Wars” films, it can disguise its appalling absence of character development, story structure or sense of direction. Like a squealing piglet, “Rogue One” suckles at the teat of its mother franchise. Since it could never survive on the strength of its own merits, it clings to its superior forebear in the hopes that some form of narrative nourishment can trickle into its starving mouth.

It tells a story whose ending we already know: the delivery of the Death Star plans—blueprints that reveal a gaping Achilles’ Heel of a planet-killing WMD—to the Rebel Alliance. This pre-determined conclusion is not inherently a problem—we all (hopefully) know how “Titanic” ends as well. Yet given “Rogue One’s” failure to enrich the “Star Wars” universe in any meaningful way, the predictability of its outcome only adds to its sense of irrelevancy. Imagine filler chopped off at the beginning of “A New Hope” extended into its own feature-length movie.

“Rogue One” fancies itself a heist film despite the fact that it presents zero clear objectives behind said heist. The Rebel Alliance recruits career criminal Jyn Erso (Felicity Jones) to confront her estranged father—an Imperial scientist (I would say that the always awesome Mads Mikkelsen is underused here, but so is everyone else) who has intimate knowledge of the Death Star’s operations. Meanwhile, her partner, Cassian Andor, (Diego Luna) has been ordered to kill her father so that the secrets are not leaked.

One would think Cassian’s goal to kill Jyn’s father would inspire some great conflict between the two, right? Wrong. “Rogue One” has no real understanding of narrative consequence. Scenes shuffle along in perpetual disconnection. Actions between characters may bounce off each other, yet there’s no relationship to what came before. The plot is a never-ending series of “and then this happened.”

The result is an elaborate excuse to retread territory already visited time and time again. For the foreseeable future, our summer and winter movie seasons will be defined by “Star Wars.” These are our lives now. Disney and Lucasfilm have an opportunity via this “Star Wars Anthology” series to explore new ground and build on this beloved universe’s lore. Instead, it clings desperately to what was already established decades before. There is a whole galaxy at its disposal, yet “Rogue One” drifts back and forth between the same tired hotspots—both literally and narratively.

Nowhere does “Rogue One”’s fear of growth feel more insidious than its horrific CGI resuscitation of Peter Cushing—the long-dead actor who played Grand Moff Tarkin in the original “Star Wars.” Tarkin’s cartoonish, artificial visage is the ugliest CG character—on both an aesthetic and moral level—in any “Star Wars” film. Yes, worse than Jar-Jar. They actually had the nerve to bring an actor back from the dead without his consent and then reanimated his hollow digital corpse in the name of brand-recognition. “Rogue One” is so fundamentally terrified of new ideas that it literally zombifies relics from its past.

Yet it doesn’t even seem to realize the appeal behind what it leaches off of, as demonstrated by its complete mishandling of Darth Vader. To give you an idea of how little “Rogue One” actually understands its properties, the film actually forces James Earl Jones to utter, “be careful you do not choke on your aspirations” as he executes his infamous force choke on an underling. Vader is callous and cold-blooded, not a moustache-twirling pun-dropper.

In spite of my problems with “The Force Awakens,” the new characters were not among them. New additions like Rey, Finn, and Kylo Ren had fully fleshed-out personalities and (somewhat) clear motivations. This is not the case with Jyn, Cassian, and Orson Krennic—names that I had to look up on IMDB five minutes after I left the theater.

Not a single moment exists within the movie where there is a real sense that the characters have learned something or had their viewpoints changed. Jyn does not have any real conviction in the rebel cause…until the movie decides that she does. Characters don’t trust each other…until they do.

While I admire the film’s insatiable bloodlust at its climax, these character deaths hold no impact because there was barely a “character” to begin with—just a thinly-sketched outline of a real being. The film follows the “Game of Thrones” principle where it believes a “shocking” death can substitute for a lack of any meaningful pay-off.

Perhaps even more appalling than that dreadful pun mentioned above—an more emblematic of “Rogue One’s” nostalgia-fixation—is when Vader ignites his lightsaber in a space shuttle hallway to massacre defenseless rebel soldiers. This scene, greeted with cheers from my audience, serves no narrative purpose beyond to make Vader “look cool.” It’s as if Kylo Ren himself—a warped, juvenile fanboy who worships the cloaked Sith Lord with an almost religious reverence – directed this self-indulgent, tone-deaf nonsense.

“Rogue One” does not deserve intense scorn or ridicule. The feeling it most conjures up is disappointment. It clings to its host like parasite, made even worse by the fact that it fails to understand what made its mother series so great in the first place. Presented with an opportunity to explore, “Rogue One” refuses to leave the nest.

Nate Taskin can be reached at [email protected] and followed on Twitter @nate_taskin.