I love football, but injuries mar the game 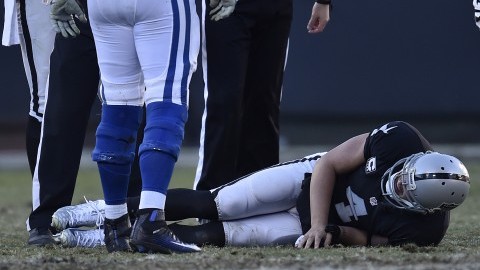 Oakland Raiders quarterback Derek Carr (4) sustains an injury after being tackled by the Indianapolis Colts' Trent Cole in the fourth quarter at the Coliseum in Oakland, Calif., on Saturday, Dec. 24, 2016. (Jose Carlos Fajardo/Bay Area News Group/TNS)

Football is a vicious sport. Players get injured in nearly every game. Athletes ruin their bodies and their minds as they entertain the country. When I watch football, I know it is at the expense of the competitors on the field.

There’s a problem, though: I love to watch football. I know that the National Football League is an organization more focused on profit than on players’ safety, but I am still drawn to the sport anyway. I grew up in Foxborough, a ten-minute drive from Gillette Stadium. New England Patriots players came to my school as a kid. I want to see Tom Brady win ring number five, and I want to see the look on Roger Goodell’s face when he has to hand Brady his fourth Super Bowl MVP trophy.

I am conflicted. I know that my enjoyment is at the expense of the current and future health of NFL players. Just about every NFL game reminds me of this. There are so many times that players get injured during football games. Just a few weeks ago, during the Week 17 game between the Patriots and the Miami Dolphins, newly acquired Patriots wide receiver Michael Floyd completely leveled the Dolphins’ Tony Lippett. The play was legal, and many people praised Floyd for the hit, but I can’t help but wonder what damage was done to Lippett on that play.

The next week, in the first round of the playoffs, the Pittsburgh Steelers played the Dolphins. Oh, the poor Dolphins. Their quarterback, Matt Moore, suffered a crushing blow from Bud Dupree of the Steelers. Moore went back into the game after sitting out only one play. Dupree was fined for this hit, but that does not reverse the damage done. Moore went through the concussion protocol but was somehow cleared to play, Yahoo Sports reported.

Between 2012 and 2015, NFL players suffered over 200 concussions in total each season. According to the NFL player concussion pamphlet, common symptoms of concussions are imbalance, headache, confusion, memory loss, loss of consciousness, change in vision, hearing or mood, fatigue, and malaise. Concussions have also been linked to dementia, Alzheimer’s disease, depression and chronic traumatic encephalopathy, or CTE, said CNN. An NFL official last year acknowledged the connection between CTE and football. Multiple NFL players with CTE have taken their lives.

Some fans who enjoy watching big hits complain that the league is soft. They say that football was better in the old days, when you could really lay into people and would not be penalized. But I don’t think the league “getting soft” is the problem. The problem is that football players put their short and long term health at stake to play the game, and as an empathetic person I worry about the health of players like Wes Welker, who endured six concussions over his 12-year career. You could argue that these players are certainly paid well enough for their physical troubles, but I would argue that money does not do much to console a broken body or a ruined mind.

Despite this, I will follow the Patriots and their postseason run. I can’t help it. I want to know if good will prevail and if Brady will cement himself as the best ever. I want to watch every moment as it unfolds. But I will watch with a guilty conscience knowing that my pleasure comes at the cost of players’ well-being.