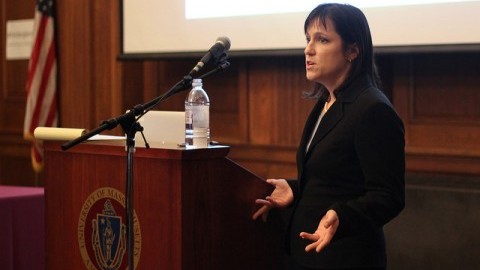 Megan Kludt gave a speech at the University of Massachusetts Amherst on November 10. Jong Man Kim/Collegian)

Students, faculty and community members gathered in the Weinstein Auditorium in Wright Hall at Smith College Monday night for an immigration law teach-in.

According to the law firm’s website, Kludt “specializes in complex immigration cases in the areas of business, academia, scientific research, and the arts. She also is an expert in client representation at [United States Citizenship and Immigration Services] interviews and in the Immigration Courts in Boston and Hartford.”

The teach-in came after Trump signed an executive order Friday banning citizens of seven Islamic majority countries from entering the U.S for the next 90 days. The seven countries include Iraq, Syria, Iran, Libya, Somalia, Sudan and Yemen. Trump also halted all admission of refugees from entering into the U.S. for the next 120 days.

The bans, according to Trump, are in place to protect the United States from foreign terrorists entering into the country.

The restrictions also apply to individuals with dual citizenship if one of their citizenships is among the seven countries listed, Kludt said. This policy will not affect dual citizens with citizenship from the United States.

Kludt said she has been eagerly watching the news for any new information about Trump’s immigration policies and what effects they might have on traveling to the U.S.

“We are desperate to learn how this is going to be implemented,” she said.

Kludt said though she is an immigration lawyer, she does not have all the answers about the impacts of these policies.

As a part of one of his campaign promises, Trump plans to build a wall at the southern border that may cost upwards of $10 billion. Kludt said this decision is “aimed at Mexico and Central America.” A report must also be completed within 180 days studying the security of southern borders, she said.

On the issue of sanctuary cities, Kludt said that urging legislators to make communities sanctuaries is one way to disrupt Trump’s orders.

“It is really important to get your local city to comply with this,” she said.

Northampton and Amherst have both declared themselves sanctuary cities Kludt said, while Springfield has declined to do so despite a protest urging Mayor Domenic Sarno to declare the city a sanctuary on Friday night.

Thousands gathered at Copley Square in Boston to protest Trump’s immigration freeze as well. Among the protesters were Senator Elizabeth Warren and Boston Mayor Marty Walsh who both spoke out against the ban.

Kludt said that Trump plans to hire around 5,000 new Border Patrol agents as quickly as possible, while pushing the Department of Homeland Security to hire around 10,000 additional Immigration and Customs Enforcement officers.

In order to do so Kludt said Trump must have the support from Congress and without it these policies will be hard to implement.

“If Congress does not give him the money he is stuck,” Kludt said.

Kludt advises anyone from one of the seven countries currently under the 90-day ban to not travel outside of the country.

“I can’t be sure people are going to be safe and able to return,” Kludt said.

“If you are here we can protect you better. Once you’re abroad you don’t really have the same access.”

She urged people not to travel unless it is completely necessary as well as to talk to immigration lawyers about their experiences.

Kludt added that action and work needs to be done in order to secure the safety of these individuals and to push back against Trump’s immigration orders.

Carson McGrath can be reached at [email protected] and followed on Twitter @McGrathCarson.