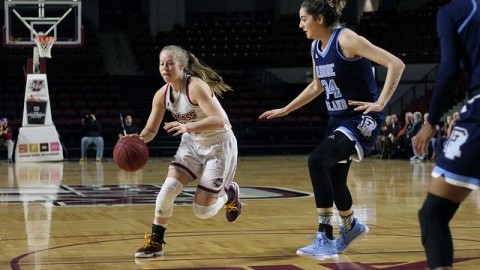 Freshmen Hailey Leidel starred for the Minutewomen (7-9, 1-2 A-10), scoring a season-high 27 points. The forward shot 8-17 from the field, knocking down five shots from behind the arc and making all six of her free throws. No basket was more important than the game-winning basket she made with just under a minute to play, though. Leidel drove the lane and put up a floater to put UMass up by one, a lead they would not relinquish.

“It means a lot that (Leidel) has that kind of confidence to go out there and hit a game winner for us,” Minutewomen coach Tory Verdi said after the game. “It’s a feel-good win for us.”

In a back and forth game that saw the lead change hands fourteen times, it felt like it would be whoever took the final shot would be the one to come out victorious. Yet it was the UMass defense that stepped it up at the end to preserve a victory. After the Leidel basket, the Minutewomen forced URI into a turnover with 40 seconds left to give them the ball back.

UMass milked the clock down on their next possession, and Leidel missed a jumper. The Rams (4-11, 0-3 A-10) got the ball into the hand of their best scorer, Charise Wilson, who raced down court. Verdi order his team to intentionally foul her, forcing URI to inbound on their sideline with four seconds left.

“We fouled the first time, then they had to inbound the ball on the sideline,” Verdi said. “We didn’t want (Wilson) to go end line to end line after we missed that shot, so we fouled. It was a great foul.”

On the ensuing inbound, the Minutewomen were able to key in on Wilson, and when they got her the ball, they forced a quick jump ball, with the possession arrow staying with the Rams. Knowing he still had one foul to give before sending URI to the free-throw line, Verdi ordered his team to foul again on the next inbounds pass in hopes of taking more time off the clock. The strategy worked, but it still left two second left on the clock, giving the Rams a third sideline inbound with a chance to win the game.

“We had one more fouls to give and on the last possession we played it out with two seconds to go,” Verdi said.

UMass got the stop they needed, as Ryan Holder intercepted the inbound pass, sealing the victory for the Minutewomen. UMass was able to key in on Wilson to make the steal, as they knew that was who URI would look to set up for the game-winning shot.

“We got a stop when we needed. I thought our players executed very well,” Verdi said. “When we needed the stop the third time, I thought we did a great job. We knew where the ball was going to go and we doubled it and she turned it over and that was the game.

Wilson, who was coming off back-to-back 30-point performances in the Rams’ first two conference games, finished the game with 26 points including six 3-pointers. URI shot 15-for-39 from behind the arc on the day.

Verdi was complementary of Wilson after the game, and was proud of his defense for executing their game plan for slowing her down.

“She’s a scorer, that’s what she does. Every time she touches the ball, if she has any spec of daylight she’s able to attack and get to the rim,” Verdi said of Wilson. “She’s tough to stop and you have to game plan around her and our game plan was to contain dribble penetration and they come out and they took 39 threes. I thought our kids did a good job with that.”

Verdi was pleased with the way his team rebounded from their three-game losing streak.

“I’m really proud of our kids. This was a really big win for our program,” Verdi said. “The fact that we’re only playing six kids and we got our seventh win and our first conference win, it means a lot.”

“I thought that after the FIU game, where we didn’t play well, we started to grow. We played better against Drexel, and I felt that our team started coming together. At Dayton we played very well, we didn’t come away with a win, but I saw us growing and that’s all I want to see, our kids and our program growing each and everyday.”

The Minutewomen will be back in action Saturday when they take on Saint Joseph’s on the road. Tip-off is set for 2 p.m. in Philadelphia.