Latest Louis Vuitton collaboration is anything but supreme 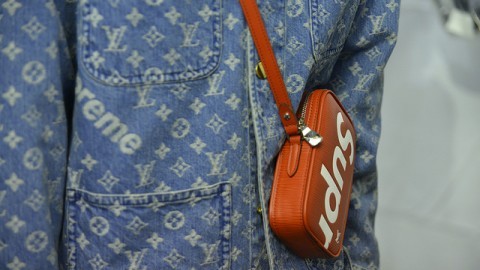 Louis Vuitton has reigned as one of the most influential fashion houses in the world. Its signature LV can be found on pieces as iconic as its trunk series or on its lesser known, and slightly eccentric, ostrich leather bag collection.

On the other side of the industry, Supreme has been one of the most respected brands in street style since its opening in 1994. Unlike Louis Vuitton, which markets itself as a high-price brand of luxury, Supreme’s main marketing is generally aimed toward skaters and younger, trendier audiences. Supreme has been sported by a variety of A-List stars like Tyler, The Creator, Lady Gaga and John Mayer.

For years the two ends of the fashion industry—runway and street style—have been building ideas off of each other and adding their own signature stamps. Rappers have started designing and attending runway shows. And designers have been doing more than seeking endorsements from the hip-hop community. They’ve begun to actually add hints of the hip-hop fashion to their collections.

High fashion brands like Louis Vuitton are incorporating more wearable, athleisure-type pieces into their lines so they can be spotted both during the shows and on the streets. Balmain even combined its campaign with Kanye West’s music video for “Wolves” from his “Life of Pablo” album. In the campaign Kanye was able to showcase his music while Balmain displayed their latest pieces in their haute couture line.

But until now, the two worlds have never officially collaborated in a partnership as big as the Louis Vuitton and Supreme collection at Paris Fashion Week 2017.

So, with all of the buildup around the next generation of fashion, it made the collection even more of a disappointment.

With all the potential of Louis Vuitton’s infamous luxury style and the simplistic modern tones of Supreme, the collection had the resources it needed to start this new generation of style off right. Instead, Vuitton’s menswear collection simply fell short.

That’s not too say the line was a complete and utter tragedy. There were some inspiring looks that managed to combine the cool aspects of street style with the extravagance of runway looks. These included camouflage jackets layered underneath chic trenches and fur-trimmed bomber jackets paired with loose-fitting gray trousers. In general, the looks from the collection without the Supreme branding were nothing unique or revolutionary.

From gray sweaters to brown trench coats, the pieces from Vuitton lacked anything that shouted Paris Fashion Week. Honestly, the line reminded me a lot of when Kanye West sold a plain white t-shirt for $120. Just truly remarkable.

There were occasional graphic button downs, and a few jackets that were unique but for the most part, dupes for this collection could already be found at places like H&M or American Eagle, where they’ve been for years.  It’s almost as if Vuitton realized this pattern with its collection and called up Supreme as a Hail Mary to make the collection interesting.

Despite my disappointment in the originality of the new line, without the Supreme collaboration there’s no way I would be writing an article on the latest Louis Vuitton menswear line. That’s not to say that it wouldn’t be a popular line; after all, it is Louis Vuitton. But without that iconic red brick of Supreme branded on bags, trunks and shirts throughout the show I’m not convinced that this particular collection from Louis Vuitton would be considered up to the brand’s usual standards.

Supreme’s contribution offered an inkling of excitement with the placement of the logo and the playful fabrics used to make the pieces pop. But I can’t help but feel that these pieces will simply be worn among the elite as another placeholder for high fashion and Instagram followers, only later to be left in their wardrobes collecting dust.

At the end of the day, even though I wasn’t impressed with the line, I am excited for more collaborations between street style and high fashion. It’s just a shame that this unremarkable product had to be the face of a new—hopefully more promising—fashion revolution.

Samantha Gonda can be reached at [email protected]