Nine Inch Nails return on the slight, elusive ‘Not the Actual Events’ 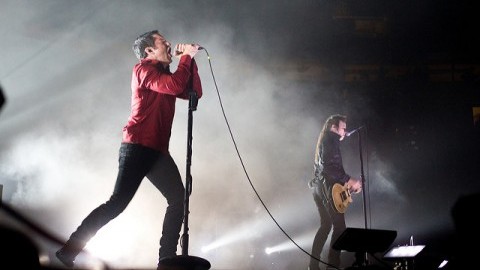 Ask anyone what their idea of Trent Reznor is, and they’ll probably come up with answers that hinge on the decade they came of age in.

If the 90s were their time, they’ll likely think of Reznor the controversial alt-rock icon; the man who drew the ire of conservatives and the adoration of millions with his vicious, futuristic, industrial-tinged meditations on depression, control and violence.

A decade later and they might think of Reznor as the chameleonic veteran who veered unpredictably between the comparatively conventional rock of 2005’s “With Teeth,” to the dystopian nightmare of 2007’s “Year Zero,” to 2008’s experimental double album, “Ghosts I-IV.”

If their knowledge of Reznor comes mostly from this decade though, they’ll likely think of Reznor as one-half of the brains behind the anxious, glitchy soundscapes that power the three most recent David Fincher films (“The Social Network,” “The Girl With the Dragon Tattoo” and “Gone Girl”) and other blockbusters such as “Patriots Day.”

It recently became clear that although Reznor initially sought to keep the legendary Nine Inch Nails brand separate from these bleak, dramatic scores (all of which he composed with Atticus Ross), Reznor’s cinematic work had begun to inform Nine Inch Nails. The band’s last full-length album, 2013’s “Hesitation Marks,” was filled not with the tortured, distorted jackhammers of the 90s or the grandiosity of “With Teeth” and “Year Zero,” but the streamlined electronics that so often pop up in the films Reznor has worked on.

On “Not the Actual Events,” Nine Inch Nails’ first release in over three years, Reznor blurs the line between the band and his film scores to the point of non-existence. Promoting Ross from frequent collaborator to a full-fledged member of the band (Nine Inch Nails is credited in the liner notes as being comprised only of Reznor and Ross), Reznor crafts an EP that, while impressively visceral at times, is often as hit-or-miss as his scores with Ross typically end up being.

In a press release announcing “Not the Actual Events,” Reznor described the EP as “an unfriendly, fairly impenetrable record that we needed to make.” In that regard, Reznor is certainly on the money. Nothing on “Not the Actual Events” really stands out as a welcome mat. Unsettling spoken-word segments pop up throughout, while riffs are used essentially as bludgeons, concerned less with moving the songs along than nailing them so far into the ground that they’re impossible to maneuver. There are about two hooks (maybe a couple more?) to pull out of the whole endeavor.

Though this obfuscation can be irritating, like when opener “Branches / Bones” cuts itself off just as its formidable ingredients really start to gel and kick the song into overdrive, it’s not the reason “Not the Actual Events,” released Dec. 22, ends up being one of the more inessential entries in Nine Inch Nails’ discography. The fact of the matter is that these tracks simply aren’t strong enough at heart to justify the labyrinthine coatings of distortion and noise they so often receive.

Take “She’s Gone Away” for instance. The song is built on a terrifying rhythm, created on live drums, that sounds bent on nothing else but destruction. As a bass line joins in lock-step with the percussion, and Reznor whispers the song’s first words into your ear as if he’s right behind you, the whole effect is initially pretty damn intimidating. In the guise of a more conventional song, Reznor and Ross create the same chilling, unpredictable atmosphere that they have created so many times for David Fincher and other filmmakers.

Unfortunately, though, that effect wears off when it becomes apparent that “She’s Gone Away” doesn’t have much else going for it. For six minutes it relies on that same churning rhythm, merely settling into the sludge it produces rather than developing on it any way. The same can be said for the semi-metal Dave Grohl collaboration, “The Idea of You,” which tries in vein to use layer upon layer of distortion and vocals to disguise the fairly nondescript riff that lies at its core.

Even during the urgent “Dear World,” and the parts of “Burning Bright (Field on Fire)” that aren’t soaked in Dave Navarro’s histrionic shredding, “Not the Actual Events” feels like it’s holding something back, which given Reznor’s assertion that Nine Inch Nails has two “major works” waiting in the wings for 2017, isn’t terribly surprising.

As a possible primer for what’s to come, “Not the Actual Events” does its job, teasing bits of peak Nine Inch Nails here and there. For that reason though, the EP will almost certainly be dwarfed, for better or worse, by whatever “major work” ends up following it.