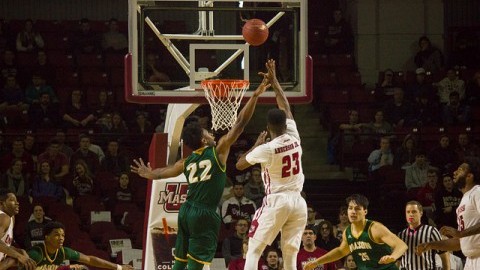 It’s no secret by now that outside shooting has been one of the Massachusetts men’s basketball team’s biggest struggles in the 2016-17 season.

Entering Monday night’s games across the country, the Minutemen (12-10, 2-7 Atlantic 10) ranked last in the A-10 in 3-point field goal percentage, shooting 29.4 percent from deep. In terms of where that stands on the national level, UMass ranked 340 out of 351 Division I teams in that category and as a team has made 162 of its 551 three-point field goals taken this season.

“A message to the guys is if you’re shooting, you know, in the 20 percent range from three, whenever I come into the office I should probably see you in there getting some extra shots up,” Minutemen coach Derek Kellogg said in his weekly conference call Monday morning.

“This is the time of year where there isn’t a lot of extra time in practice for shooting, even though we’ve done that some,” Kellogg added. “I think when you look at the numbers, a few of these guys need to be in the gym working on their craft to make sure those numbers go up.”

“We’re probably one or two threes a game away from having a really good record. When the margin for error is that small, get your butt in the gym and shoot.”

Through 22 games this year, C.J. Anderson leads UMass with a 38.7 percent clip from three-point range. Ty Flowers ranks second with 31.5 percent while Donte Clark’s 30.9 percent rounds out the Minutemen who are above 30-percent of players who have attempted more than 10 threes this season.

Luwane Pipkins, who has attempted the most threes this season (161), is shooting 29.8 percent from deep while Zach Lewis follows close behind at 28 percent, making 28 of his 100 attempts. DeJon Jarreau has endured the most struggles and is shooting just 19.7 percent.

Anderson harped on Kellogg’s statement’s Monday afternoon before practice and thinks it’s just a matter of players spending extra time in the gym to work on their shooting.

“What’s going to help us is getting in the extra work even though it’s been a long season already.” Anderson said. “With games and school just getting back started, you still need to get the extra work in. I’ve been talking to [the younger guys] as well just because you want to see the ball go in the basket. We’ll get in today, make sure we’re getting some extra shots for some of the guys after practice. We’ll be ready.”

When Kellogg shook up the starting lineup prior to Saturday’s 76-74 loss to George Mason, it partially came as a shock to Anderson.

But regardless of whether he’s starting or coming off the bench, Anderson said his mindset doesn’t differ at all. He started 11 games last year as a sophomore for the Minutemen.

“I’m locked in, whichever way it goes,” Anderson said. “I always bring energy whether I’m starting or not. My thing is to always be mentally prepared and to always be ready to play. Once he called my name to start, I was ready to go.”

Anderson finished with 11 points and seven rebounds in 35 minutes in the loss against the Patriots.