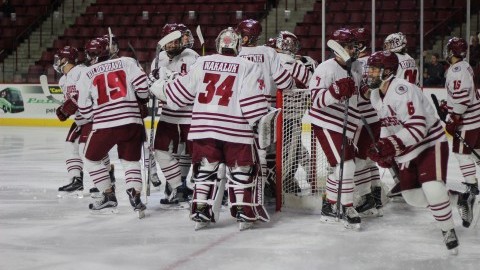 The Massachusetts hockey team was looking to rein in the New Year with some hardware on Saturday in the championship game of the Mariucci Classic against host Minnesota.

However, the Minutemen’s (5-13-2, 2-7-1 Hockey East Association) struggles with special teams would haunt them early and often as the Golden Gophers scored a medley of special goals (two power-play goals, a short-handed goal and an empty net goal) on route to a 4-1 victory.

UMass put itself behind the eight ball early with a crosschecking penalty on freshman defenseman Shane Bear just 26 seconds into the first period. Minnesota (11-5-2, 3-1-0 Big Ten) capitalized quickly on the opportunity when forward Tyler Sheehy scored on the ensuing power play to take a 1-0 lead.

“It’s not how we wanted to start the game taking a penalty,” Minutemen coach Greg Carvel told WHMP following the game. “Then they capitalize right away, and I felt like they spent a good portion of the game on the power play through the first two periods, which is tough to do against a skilled team.”

The second period presented UMass its first power-play  opportunity, but just over five minutes into the stanza Golden Gopher senior Justin Kloos buried a short-handed goal on a break away coming from a turnover high in the offensive zone by the Minutemen expanding the lead to 2-0.

Despite forward Jonny Lazarus bringing UMass back within a goal courtesy of an odd man rush later in the second, a tripping penalty on freshman Griff Jeszka opening the door for Minnesota to extend its lead again.

Just two minutes after the Lazarus goal, the Golden Gophers regained their two goal lead with a second power play goal by junior Mike Szmatula. Minnesota would take the 3-1 lead into the intermission.

The Minutemen had a an opportunity in the third with a five-minute major coming with just over six minutes to go in regulation, but UMass failed to capitalize as it finished the night 0-for-6 on power-play opportunities – and 0-for-9 for both games in the tournament.

An empty net goal forward Vinni Lettieri would ice the 4-1 victory for the Golden Gophers with 37 seconds to go.

UMass opened the Mariucci Classic on Friday with a 2-1 win against Alabama Huntsville in overtime.

Just over two minutes into the overtime period, Jeszka tapped home a pass from defenseman William Lagesson right in front of the net to give the Minutemen the 2-1 victory.

For Jeszka, this goal came after taking two penalties in the third period with the game tied 1-1.

“It’s not a good feeling to take two penalties like that in the third period,” Carvel told WHMP following Friday’s game. “That’s a long two minutes in the penalty box when the game is tied. So I’m happy for Griff that he was able to redeem himself, and he’ll be able to sleep tonight.”

The Chargers (7-13-2, 7-7-2 Western Collegiate Hockey Association) tied the game with goal from Max McHugh 3:35 into the second period.

While the Minutemen still suffer from power-play woes, at even strength UMass outscored their opponents over the weekend by a combined 3-1 (the empty net goal not included).

The Minutemen can also hang their hat on the improving play of Freshman goaltender Ryan Wischow moving forward, as he finished the tournament with 29 saves in the first gave against UAH and 35 against Minnesota – giving him a .941 save percentage for the tournament.

UMass will open 2017 against American International  Tuesday with puck drop scheduled for 7 p.m. at the Mullins Center.

Nick Souza can be reached at [email protected] and followed on Twitter @nicksouza27.