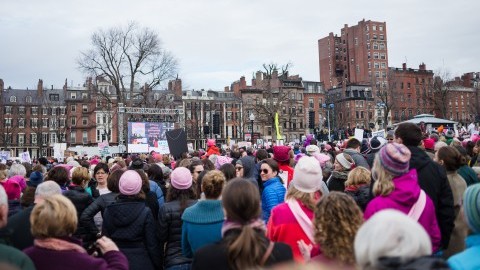 The “Women’s March” began organically, with one woman inviting around 40 of her Facebook friends to join her on a march to protest Donald Trump. But that event grew and evolved with the anger that was felt toward our 45th president, and millions of people took to the streets the day after his inauguration across the country and around the world.

Waiting on the train platform early that morning, a woman in her mid-20s approached my family and I, sign and large coffee in hand and “p*ssy hat” proudly in place. After comparing slogans and discussing our respective strategies for navigating the crowded city, the woman began expressing her excitement for the march. With a huge grin she said, “Never in my lifetime have I seen so many people mobilizing for a cause!”

And she was entirely correct. The city streets were mobbed with people who felt small, and were coming together to make a big statement. But as I walked among the sea of thousands, those that stood shoulder to shoulder with me began to blend into one another. It was those that walked with their eyes level to my knees that truly caught my attention and ultimately made the largest impact.

There were a lot of unique chants that I heard throughout the day (including “Free Melania” and “Pence sucks too”), but my favorite by far was one of the quietest I heard. Walking up Fifth Avenue, I suddenly heard two small voices yelling “Donald Trump is a meanie” at the top of their lungs.

A young sibling duo were the source of the commotion, holding a crudely drawn sign with the words “Share your love. Don’t be afraid” written in rainbow letters and adorned with hearts. I didn’t have a chance to speak with these two before they were lost in the crowd, but the innocence with which they preached stayed with me as the night got darker and the chants got louder.

As a Harry Potter fan, the other poster that naturally caught my eye was the one with a picture of Mad-Eye Moody and the words “Constant Vigilance” written on it, but once again it was the girl holding the sign that truly grabbed my attention. 13-year-old Grace walked next to her mom, holding her sign high and yelling as loudly as all the adults around her.

When I finally caught up to Grace to compliment her poster, she explained to me that this was her first protest, but hopefully not her last. She went on to say that she’s wanted to go into politics ever since she was a young girl watching Condoleezza Rice.

“That’s when I knew that women CAN do this!” Grace said, as her mom looked on from a step behind.

Grace and the young siblings were unique but not alone, as children dotted the crowd in block after block. Boys dressed as superheroes sat on their father’s shoulders and kids took naps in strollers as moms marched along. I saw one mom carrying her five-month-old son on her back, with matching pink p*ssy hats for the pair.

But at the end of the march, as I sat on the train going back home, I didn’t find myself feeling any better about our country or the situation that we are in. A protest ultimately does not accomplish anything. We gathered, we marched and we made noise, but Donald Trump is still our president.

I thought back to the incident earlier in the morning, when the woman at the train station was chattering away about her excitement to mobilize. As she and my cousins agreed with one another, their energy and excitement radiating off of them, my mom became quietly emotional on the outskirts of our small circle.

My mom explained to me that she has seen this kind of mobilization in her lifetime. She has fought this fight for decades, and while she is proud to continue fighting, it is disheartening that she has to do so.

I don’t understand the pain my mom felt earlier today, and I hope that I won’t understand it when I am her age either. I hope that I won’t have to again march among thousands protesting for the rights of women, telling my children about the time I walked up Fifth Avenue with their grandma, chanting about the president with tiny hands who bragged about grabbing women by the p*ssy.

I hope that one day I won’t have to continue fighting, but I also know that if there is still a fight to be fought that Grace and I will be there, watching our children marvel at the amount of people mobilizing for a cause as they hold their crudely drawn signs adorned with hearts.

Donald Trump is our president, but his morals are not our morals, and they are not the morals of our children. I watched that day as young children proudly stood up for kindness in the face of such powerful hate, and although I am still fearful for my future and the futures of those children, I am confident in our ability to make those futures bright.