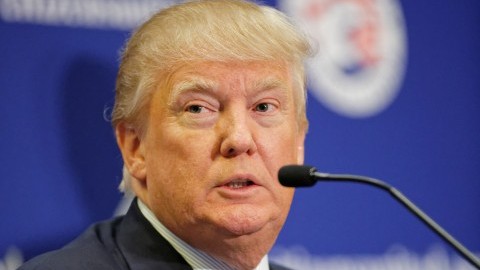 We are a little over a week into Donald Trump’s first term as president and a lot has happened. But instead of talking about the policies he’s proposed, or the executive orders he has signed (all of which have gone against the progressive trend that Obama’s legacy is based on) I want to speak about language and how it has been codified and used as a weapon against the people and the truth.

In 2008, the country saw the emergence of a United States Senator from Illinois named Barack Obama. Still young and a fresh face on the political scene, he traveled the country with his message of hope and change. It was inspiring campaign rhetoric. Such words grabbed the nation and at the height of Obama’s 2008 campaign, his team was raising a record amount of funds, much of which came from small individual donations. But his rhetoric is what stuck with people. “Change We Can Believe In” and “Yes We Can!” became words that Americans championed. Following the election in 2008, “Yes We Can!” turned into “yes we did.”

Obama’s ability to speak eloquently and his use of positive rhetoric stands in stark contrast to that of his successor. No one can deny Trump’s effective use of language during his campaign. Obama said to David Remnick of The New Yorker, “…obviously, he tapped into something. He’s able to distill the anger and resentment and the sense of aggrievement. And he is skillful at challenging the conventions in a way that makes people feel something and that gives them some satisfaction.” Instead of unifying the electorate, Trump instilled fear in voters by promoting populism. “Make America Great Again” is a slogan that doesn’t so much refer to his goals for the country as it does his own personal aspirations.

Trump couldn’t run on his record because he didn’t have one. He ran on his language and was held to a different standard as a result. Only he could get away with saying what he said because he had been saying it for decades. His language fashioned him as an outsider that would take down the establishment that was Hillary Clinton. The word associated with her, “scandal,” was something she could never escape and it damaged her campaign. Such rhetoric allowed Trump to gain support not in spite of his language, but because of it.

The Jan. 22 edition of “Meet the Press” only added to the complexities of political language and opened the floodgates to a wave of easy political techniques to belittle the journalist. Kellyanne Conway defended Sean Spicer’s over exaggeration of the Inauguration Day crowd by saying he “gave alternative facts.” The interview has launched a national conversation about the nature of what is and isn’t true in political discourse. When there are different versions of facts it becomes harder to decipher reality.

The bottom line is that words have meaning and power. People should also remember that words are a form of action. Our current president is a master of codifying language in 140 characters or less. He is bound to be a president who will leave behind much more irony than transparency. Whether it’s Melania Trump’s decision to choose anti-bullying as her cause for first lady when she’s married to the ultimate one, or Trump’s decision to appoint Rick Perry to head the Department of Energy, a cabinet position he once vowed to eliminate if elected but also couldn’t name, the new administration is filled with contradictions and scandals, many of which voters seem to care little about.

Here are some parting words that we should keep in mind, both of which are very different. The first is resistance. It comes in many forms and anything beyond peaceful has no place in this country. Following Inauguration Day, hundreds of thousands marched all over the country for a multitude of reasons. If citizens want to resist, than people must stay informed and pay particular attention to rhetoric and how it is used.

The other word is unity. Republicans now want to strive for unity after perhaps the most polarizing and ugly campaign in presidential history. The American people should not give Republicans the latitude to strive for unity when they were the ones practicing resistance for the past eight years. Obama’s “Yes We Can!” quickly turned into “why we couldn’t.”

Suddenly those who want to resist Trump are belittled for not coming together in unity with Republicans. It’s nothing more than a double standard.

This past week, George Orwell’s “1984” jumped to the top of the Amazon best-seller list. I can’t help but wonder if Orwell is ecstatic or cringing.