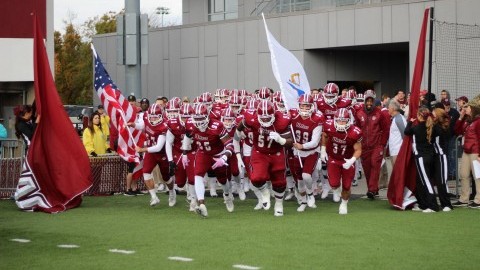 The Massachusetts football team will begin its season a week earlier than most fans expected when it was announced Thursday that the Minutemen’s game against Hawaii will be played Aug. 26 at McGuirk Stadium, the first game of the FBS season.

UMass coach Mark Whipple is happy with the decision to move up the game from the originally slated date, which was Oct. 7.

“We’re excited to kick off the 2017 college football season hosting Hawai’i in Amherst,” Whipple said in a press release Thursday. “This move provides competitive balance to our schedule and perfect timing for a bye week. We have exciting things in store this season and there’s a lot to look forward to.”

The Minutemen lost to Hawaii 46-40 at Aloha Stadium in the finale of their 2016 season, a game that dropped their final record to 2-10.

Thursday’s announcement also came with news that UMass will host Youth Sports Day in its matchup with the Rainbow Warriors. Along with this, the Minutemen will host Hometown Heroes Day versus Old Dominion Sept. 9, Faculty/Staff Appreciation Day versus Ohio Sept. 30, Breast Cancer Awareness Day against Georgia Southern Oct. 21 and Senior Day versus Appalachian State Oct. 28.

The Minutemen will play five of their six home games at McGuirk in 2017. The lone game not in Amherst will be against Maine, where UMass will be playing at Fenway Park Nov. 11.

Here’s a full look at the Minutemen’s 2017 schedule: