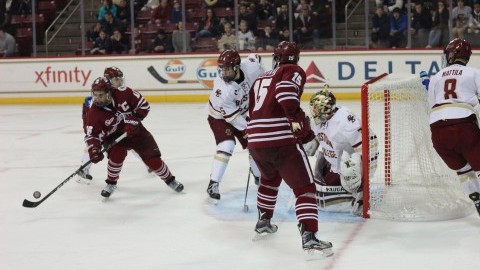 The Massachusetts hockey team came out of the gates against Boston College Friday night fast and with a purpose.

Unfortunately for the Minutemen, that was the only positive aspect of a 6-1 drubbing at the Conte Forum.

“As a coach it’s a little frustrating tonight because we’re seeing certain mistakes being made,” UMass coach Greg Carvel said. “Again, you can have breakdowns and still be able to recover and find ways to prevent the teams from scoring.”

David Cotton broke the deadlock for the Eagles at 12:32 of the first period tapping the puck into a wide open cage following a great pass from linemate Austin Canngelosi.

That tally proved to be the game-winner as UMass only found the back of the net once off a nifty deke and shot from Minutemen senior Ray Pigozzi at 7:53 of the middle frame.

“I don’t think so,” Pigozzi said if he thought their two goals killed the momentum at the start. “When you play teams as skilled as that your margin of error has to be very small to stick with them. We had few mental lapses there and they were able to capitalize. I don’t think it killed our energy.”

“In a breakdown situation to me the defense has to cover the backside for the goalie, and hopefully the goalie can handle the shot from the strong side,” Carvel said referencing the first Eagle goal.

BC scored once more before the first buzzer sounded giving the Eagles a commanding three goal lead heading into the second period.

With time winding down, BC sophomore Chris Brown corralled the puck in the right corner and flung it out in front of Wischow where it hit a few bodies and found twine. The goal came with only five seconds left and was a back-breaking marker for UMass’ confidence level.

“I think the third [BC goal] with five seconds, the guy just threw the puck out of the corner and it hit Trento,” Carvel said.

It concluded a period that looked promising, but ended with a fluky goal and the Minutemen in a significant deficit after only 20 minutes of play.

UMass was outshot 14-1 by the Eagles in the first and Wischow only lasted the opening period as he was replaced by sophomore Nic Renyard in the second stanza.

Putting together a complete 60 minute effort continues to be a struggle for this young Minutemen team, however Carvel and Pigozzi still walked away with some high-points in this otherwise underwhelming contest.

“I think here and there we let some goals in that we wish we could take back,” Pigozzi said. “Overall I felt our energy was there and overall we were decent tonight.”