UMass hockey falls to No. 5 Boston University at Frozen Fenway 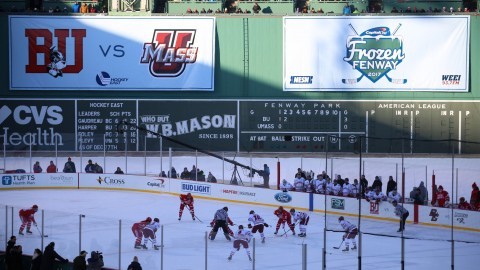 BOSTON –– With temperatures hovering around single digits all afternoon, the Massachusetts hockey team dropped to No. 5 Boston University 5-3 in the first game of the appropriately named Frozen Fenway doubleheader on Sunday.

While UMass (5-15-2, 2-8-1 Hockey East Association) made the game competitive at times, the gap in talent – seven BU players recently getting back from World Junior Championship – showed as the Terriers (12-5-2, 5-2-2 HEA) pulled away by three goals not once, but twice.

The first three-goal lead that BU built against the Minutemen started in the final minute of the first period, as sophomore Jakob Forsbacka Karlsson scored his first of two goals on the day with just 28 seconds left in period.

Special teams continued to be a problem for the UMass as they went 0-for-6 on the power play, including back-to-back opportunities in the first period and a 5-on-3 chance that lasted 53 seconds in the second.

The Minutemen refused to go away quietly though as UMass forward Griff Jeszka scored his sixth goal of the season with less than five minutes remaining in the second to bring the score to 3-1 by the second intermission.

UMass climbed back within a goal 8:21 into the third period after a turnover in the Terrier’s offensive zone led to Ray Piggozi scoring the first short-handed goal of the season for the Minutemen, cutting the deficit to 3-2.

Team captain Steven Iacobellis, who tallied two points (one goal and one assist),  managed to cause the turnover with the puck off of his own skate, got the assist on the short hander.

“It’s something we try to work on in practice,” Iacobellis said. “When the puck is along the walls, we try to take away the options along the walls. I know its tough to make that play when I’m on the power play. I kind of got lucky with the puck bouncing off my skate and Ray (Pigozzi) made a great break to the net.”

One aspect of playing on an outdoor hockey rink that both teams must deal with is the puck bounces.  This can make the game especially difficult on the goaltenders

“It’s a different game out there,” Carvel said. “I thought the ice was good, but the puck is just kind of out of control. I thought BU did a better job getting pucks to the front of the net, and then it was just a matter of which way the pucks bounced.”

BU goaltender Jake Oettinger (26 saves) withstood a couple of scoring chances to keep the Terrier’s lead through the middle of the third period.

A pair of goals by freshmen Chad Krys and Gabriel Chabot coming within a minute of each other extended the lead for BU back to three with a score of 5-2 with less than five minutes to go in regulation.

UMass managed to tack on one more goal with the goalie Ryan Wischow (25 saves) pulled from net as Iacobellis scored his fifth goal of the season in the final minute.

The Minutemen return home for another Hockey East battle with UMass Lowell this upcoming Saturday.