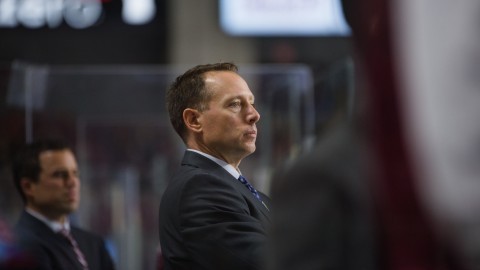 It goes unsaid how difficult it is to not only put your program in place, but to have it excel when taking over as a new head coach at any institution – be it collegiate or professional.

For Massachusetts hockey coach Greg Carvel, the challenges are the same. Playing in arguably the toughest conference in the country, Hockey East, UMass competes with the stiffest of competition, among the likes of historic powerhouses Boston College, Boston University and Providence College.

The Minutemen hold a 5-17-2 record overall and are 2-9-1 in conference through 24 games. UMass has lost five straight dating back to Dec. 31 and are averaging exactly 2.00 goals per game while allowing 3.46 to the opposition – which ranks last in both scoring offense and defense in Hockey East.

Moreover, the power play is struggling mightily. The Minutemen are a lowly 14-for-135 on the man advantage (10.4 percent), which is also last in the conference.

“After our first 12 games, I saw us take some good steps. I think after our second third of games, I’d like to see us be a little bit ahead in being able to create offense,” Carvel said after practice Tuesday. “That’s probably the one area – and the power play is a big part of it – we’re scoring one or two goals a game and that’s one area where we should be able to create more and score more.”

UMass is struggling, but it certainly hasn’t been for lack of effort. The talent level across players in the conference compared to those in Amherst puts the Minutemen at a disadvantage before the puck is even dropped.

But these difficulties were to be expected. In fact, the 2016-17 campaign has gone nearly exactly how Carvel envisioned it would.

“We compete and play hard,” he said. “We’re learning to defend. I wish we were better in our own end. I wish our power play was better. Those are really the only two areas I think we could be better. On the whole, the year has gone almost exactly how I thought it would. I didn’t know if we’d win five, eight or 10 games. Honestly, I come out of games like the Boston College game (6-1 defeat) with a lopsided score and didn’t think we played that badly.”

UMass has 10 games remaining, essentially one-third of its season, with four games to be played at the Mullins Center and another six on the road at fellow conference arenas, beginning this Friday with a road doubleheader at Maine.

Carvel is looking inward and at his team to improve, rather than making excuses in a struggling first season, which is not foreign to first-year head coaches behind the bench in Amherst.

It’s the defense more than the offense that Carvel thinks can change the landscape of the Minutemen’s performances most.

“My goals are to see how few mistakes we can make in a game,” Carvel said. “I worry more about giving the other team free offense than what we create. I want us to be really stringent without the puck. If the other team is going to get a scoring chance, they have to earn it. They have to out-will and out-skill us.”

“I’m looking for guys who can execute our system as close to perfect as we can,” Carvel added. “I believe strongly that good defense leads to good offense. As soon as we get the defensive side square, that will lead to good offense.”

“We have to find a way to put pucks on net,” Minutemen senior captain Steven Iacobellis said. “I know we’ve been outshot in a lot of games this season, but we have put the puck on net and start scoring some of those dirty goals and just keep competing. We’re stressing every day just get better for the future.”

Iacobellis leads UMass with 14 points and has played in all 24 of the team’s games. The consistency hasn’t been where he nor the team would have hoped on a per-game basis to this point, but the captain relays that the Minutemen have taken significant strides since the first puck drop of the season on Oct. 7 – a credit to the efforts of Carvel and assistant coaches Jared DeMichiel and Ben Barr despite the team’s overall record.

Iacobellis added: “I think we’ve come a really long way and that’s what we’ve stressed all year – not worrying about the wins and losses even if games look like they’re out of hand. When we watch film there’s a lot of things that we’ve done well and competing is one area is where we’ve improved on but we can definitely do better.”