UMass hockey outlasted at home against No. 6 UMass Lowell 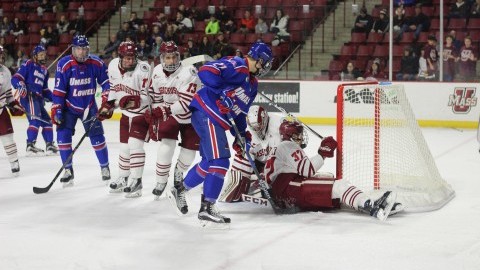 The Massachusetts hockey team hosted in-state rival and Hockey East foe No. 6 UMass Lowell in what turned out to be a much closer game than some may have expected.

UMass would ultimately be outlasted by UML, but the Minutemen made it anything but easy for the River Hawks in a 2-1 defensive grind to the finish.

While UML’s defense played strong throughout the night, it was actually a momentary lapse in judgment on the defensive end by River Hawks goaltender Tyler Wall (14 saves) that led to the Minutemen’s lone goal of the night.

In an attempt to help clear the puck from the defensive zone, Wall decided to send the puck to the nearside boards. However, he ended up inadvertently passing the puck directly to UMass forward Kurt Keats who took advantage of the open net and scored his fifth goal of the season and cut UML’s lead to one with just over seven minutes to go in the third.

“I just chipped it in deep and Anthony Petrella had a really good fore-check and the goalie just popped it right out to me,” Keats said. “It’s nice to get a goal like that, we haven’t scored too many of those or gotten many bounces. It was a nice surprise.”

The River Hawks (15-5-3, 7-3-1 HEA) did hold a significant shot advantage on the stat sheet, but many of these shots came from along the boards and outside of the slot which provided Minutemen goalie Ryan Wischow ample opportunity to rack up 35 saves on the night and keep the game close.

“That’s a tough team over there, and we kept most of the shots to the outside, and my job is to control rebounds and make a couple saves,” Wischow said. “Down 2-0 going into the third period my job is to keep it 2-0. Hopefully get a couple bounces and let the guys take care of scoring goals.”

While the stats for Wischow were solid for the night, the first goal for the River Hawks scored by center Ryan Lohin at 8:17 of the first period off a defensive zone faceoff disappointed both Wischow and UMass coach Greg Carvel.

“The first goal was not a great goal, he’s got to have that one for us,” Carvel said. “I thought he was solid in net tonight. He did what he was supposed to do, we just have to find a way to score more goals.”

“Have to watch the film on the first goal,” Wischow added. “He kind of beat me short side off the faceoff and I can’t let that happen. It kind of caught me off guard to be honest. I’m not going to lie, it was a pretty quick play and I have to be ready on those plays.”

A deciding factor of the game, and still a major sore spot for the Minutemen this season, was special teams.  UMass finished the night 0-for-5 on power play chances.

“The difference in the game was our inability to score on the power play,” Carvel admitted after the game. “We’ll keep working on the power play. It’s really an Achilles heel for us right now.”

Meanwhile, UML’s game winning goal came via power play. River Hawk defenseman Chris Forney buried a rebound off of Wischow as he was left unguarded by the back post with 9:59 left to play in the second period to put UML up 2-0.

While it was in a losing effort, Carvel was still pleased with his team’s performance.

“I’m happy with our effort. I’m happy at this point in the season, we’re playing the top five or six teams in the country and we’re being competitive,” Carvel said. “We’re making it entertaining and fun. It’s not fun to lose by four or five goals, and that’s not what’s happening. We’re competing both physically and on the scoreboard.”

The Minutemen will look to translate they’re raised effort and competitiveness to a win as this tough stretch in the schedule continues with a game against No. 8 Boston College on the road this Friday.