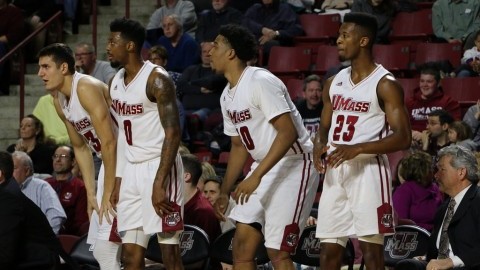 There are losses, there are some bad losses and then there was what happened to the Massachusetts men’s basketball team in its 74-70 loss to St. Louis Wednesday night.

The game, which felt like it lasted an eternity, featured a total of 86 free throw attempts. SLU went 39-for-55 from the line, the most attempts against UMass in the program’s history.

Despite the record-breaking amount of free throws that the Minutemen (12-9, 2-6 Atlantic 10) let up, they still managed to fall by only four. However, an 18-point deficit with five minutes, 54 seconds remaining in the first half proved to be a hole UMass could not fight out of.

“Obviously the first half is where the game was lost when we went down 16 points,” Minutemen coach Derek Kellogg said in his postgame interview with WEEI Springfield. “And that was really just careless turnovers and not making plays on the offensive end.”

The loss now puts UMass in a three-way tie for last place in the A-10.

While the Billikens (6-14, 2-6 A-10) kept running up their score, the Minutemen’s scorers went cold. For a span of 7:15 between a Seth Berger layup with more than fourteen minutes left in the half and a Donte Clark free throw with a little less than seven, the Minutemen’s point total remained frozen at eight.

“Even trying to make a push, you’re pressing, making some turnovers and missing wide open 3’s, we’re not obviously a high percentage 3-point shooting team,” Kellogg said. “A few of them were wide open.”

A 21-point performance from Aaron Hines, who played 37 minutes, helped SLU maintain its lead. He hit five of his six free throws in the final minute to secure the win.

Careless mistakes once again plagued UMass, especially in the first half where it committed 12 turnovers, three of which came courtesy of DeJon Jarreau. Jarreau, who had zero points in the first half, stepped his game up in the second, scoring 17. He added four rebounds, four steals, playing the entire 20 minutes of the second half.

“[Jarreau] was really bad in the first half,” Kellogg said of his freshman point guard. “I thought that he was one of the guys that helped them get that lead. Just kind of carless basketball. It is not an AAU game or high school game. This is a college game on the road. You can’t do those things. I’m going to keep working with them and watch some tape, keep pushing them.”

“My hair is going to keep falling out and turning grey, but I do think if he can turn the corner in spurts like he did in the second half we’ll become a good college basketball team.”

Kellogg was also disappointed with Rashaan Holloway’s lack luster performance, especially given how well Holloway has played as of late.

“I’m expecting a little more especially out of Rashaan,” Kellogg said. “He’s been playing like a first team all league guy and a guy that I think is one of the better players in the league and he had no pop tonight, didn’t get much done out there.”

Holloway scored only three points and picked up only four rebounds.

With George Mason coming to Amherst Saturday, Kellogg’s message to the team is to just stick together.

“This is really a team building time to make sure we stick together and come back and fight,” Kellogg said. “I don’t think we are that far off, but we aren’t that close. I know I keep saying that, but I think we can put it together and honestly just play smarter – just take care of the ball a little bit more and don’t put to teams to the free throw line.”

This will be the second meeting between the Patriot’s and the Minutemen this season. George Mason came away with the 86-81 win Jan. 4, in Fairfax, Virginia.