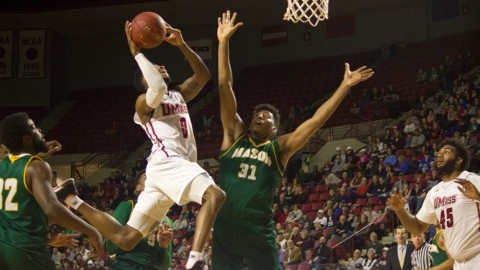 The basketball gods have not been good to the Massachusetts men’s basketball team when it comes to pulling out close games that come down to the final seconds.

Going into Saturday afternoon’s game, UMass (12-10, 2-7 Atlantic 10) had a slew of games that have fit this bill whether it be the Mississippi game or last Saturday’s loss to Fordham, among others. The Minutemen’s second matchup of the season with George Mason (14-7, 4-4 A-10) provided another tick in that column of heart-breakers with UMass falling 76-74 to the Patriots.

For the Minutemen, the first half was filled with disjointed play and saw UMass shoot just 39.4 percent from the field, including mediocre 3-for-14 from the 3-point line.

The second half told a different story as UMass the used the heightened excitement of the Mullins Center crowd to some inspired play as it outscored GMU 40-33 in the final 20 minutes of play. Seven 3-pointers and nine blocks gave fans a glimpse of what the Minutemen can be when they are locked in on both ends of the floor.

UMass coach Derek Kellogg was happy with the effort in the second half and thought it was just minor mistakes prevented the Minutemen from coming out with a win on Saturday.

“I thought at the end of the game we executed just about everything,” Kellogg said. “I told the guys in the timeouts, we just didn’t make a few of the plays, missed a couple free throws and then they executed a late-game free throw miss to get try to get a 3 off that was wide open. We’ve got to keep doing the right stuff in everything we do to make sure those balls bounce your way.

Guard Donte Clark came off the bench for the first time this season, but still managed to lead the Minutemen in scoring with 13. The junior echoed similar sentiments to his coach.

“Yeah I think we can build off the good things. I don’t want to say we’re doing a lot of bad things, but we’re making some minor mistakes that are hurting us,” Clark said. “Like towards the end of the game and stuff like that and throughout the game and probably the way we started off games, sometimes we start off kind of slow which gives the team confidence and they take the lead and we’re playing from behind.”

Clark has been up and down throughout the season offensively, sometimes being the leader on that end of the floor while at other times struggling to find his groove and disappearing. Despite his inconsistencies, he came into Saturday leading the team with 13.4 points per game. Clark will look to lead offensively moving forward.

“From here on out, I’m trying to be more aggressive with the way I play for the rest of the season,” Clark said.

Ty Flowers is another player in a similar boat to Clark, not being consistent at times. But much like Clark, the freshman forward came through in a big way in the second half. Flowers scored all 11 of his points in the second half, including a 3-for-5 mark in the last 20 minutes.

“I think he has a nice stroke and when he gets some confidence and plays with some fire he’s making those and tonight was good game for him and now we just have to get him on that flow on a regular basis,” Kellogg said.

With the disparity in UMass’ play from the first to the second half and the game coming down to the waning seconds, Patriots coach Dave Paulsen was a bit nervous if his team would come out on top.

“You have to give a lot of credit to UMass, they fought back, I was a little nervous when the shot went up at the end of the game I’m not going to lie, but sometimes you have to dodge a bullet,” Paulsen said, in regards to the Minutemen’s play and specifically the missed 3-pointer at the buzzer by C.J. Anderson.

With so many games coming down to the last second, Kellogg is hoping that karma is on UMass’ side and they can pull out these late-game situations moving forward.

“I’m hoping that soon here we’ll win a couple of these close games and give us a little opportunity to give us some wins in the win column,” Kellogg said. “It gives you a great satisfaction or a punch in the gut and right now, I’ve got a bunch of punches in the gut. I know the guys feel the same way.”