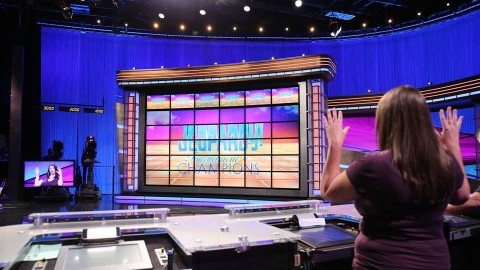 For students and professors, winter break is an opportunity for rest and relaxation. For one University of Massachusetts professor, he had the opportunity to be featured on national television testing his trivia knowledge and making big wins.

English professor and associate dean Joseph Bartolomeo appeared for a three-day run on “Jeopardy!” which began on the Jan. 5 episode.

Bartolomeo, who joined the UMass English faculty in 1986 and is now an associate dean for the College of the Humanities and the Fine Arts, won on his first and second appearances.

On his third appearance that aired on Jan. 9, the final round was on “19th century notables.” The clue was “Calling him a red-headed madman, in 1889 a group of his neighbors signed a petition to ban him from his home in Arles, France.”

Bartolomeo answered the hint correctly, which was Vincent Van Gogh. However, he lost by $604.

“I wish I had been a little more deliberate on the last day,” Bartolomeo said with a laugh. “Hindsight is 20/20.”

In early 2016, Bartolomeo was among a pool of around 70,000 people who took the online test and made it past the qualifying round, according to a news release sent by Associate Director of UMass News and Media Relations Daniel Fitzgibbons. From that pool, about 3,000 were selected for auditions and 400 people from that group were invited to appear on the show.

Following his audition which took place in New York in June, Bartolomeo flew to Los Angeles to tape his appearances in late September.

During his appearance, Bartolomeo faced question of varies categories such as American literature, Canadian lakes and the career of Rita Moreno.

“To me, the category that drew a complete blank on me was Brazilian cuisine,” Bartolomeo stated with a laugh.

A strategy that Bartolomeo implemented to get the most answers correctly was to mash the buzzer repeatedly.

“There’s sort of a sweet spot for ringing in when Alex Trebek finishes reading the question. They flash a light which is not visible to the audience at home,” Bartolomeo said. “And that’s the moment when you need to ring in and sometimes I got there first and sometimes I didn’t.”

Bartolomeo became a viewer as a child when he started to watch the show with his mother. He also played the board game version of “Jeopardy!” as a child with his family.

“I suppose I realized then that I was pretty good at retaining obscure facts,” Bartolomeo said.

“The whole experience was a…bucket-list item that I thought I’d never get to check off,” Bartolomeo said.

While Bartolomeo waits for his check to arrive, he plans to use some of the money to buy a new guitar.

“Now, I will associate [the guitar] with the ‘Jeopardy!’ experience,” he said.