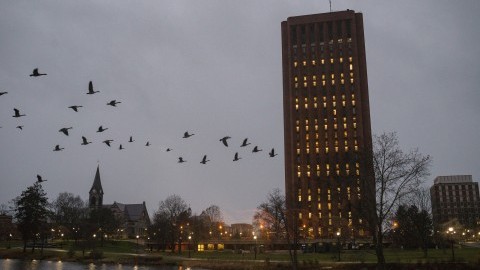 Editor’s Note: This article and headline have been updated to include information on the dismissal of the case against Geoffrey Small. Charges against Small were dropped and the case was dismissed as of Aug. 2017.

The case against Geoffrey Small, a former University of Massachusetts student accused of threatening the University has been dismissed.

Small was charged on Jan. 24, 2017, in Eastern Hampshire District Court with threatening to commit a shooting at UMass, according to Mary Carey, a spokesperson for the Northwestern District Attorney’s Office.

Small, a 22-year-old from Newbury, Mass., was “released on his personal recognizance with the conditions that he stay out of Hampshire County and away from UMass, not take drugs, submit to random drug testing and undergo anger evaluation and recommended follow-through,” said Carey in a press release.

According to MassLive, Small was indicted on two counts of threatening to commit a shooting by a Hampshire County grand jury in May. The following day, the original charge was dropped in district court.

A motion to dismiss the superior court case was filed and Judge Richard J. Carey “determined Small had no intention of acting on anything he said,” according to the article published by MassLive on Aug. 3, 2017. Carey’s ruling dismissed the superior court charges and wrote “that the case was based on a dorm mate’s testimony.”

Hayley Johnson can be reached at [email protected] or followed on Twitter @hayleyk_johnson.