UMass swimming and diving drop final dual meet of season at Fordham, look ahead to A-10 Championships 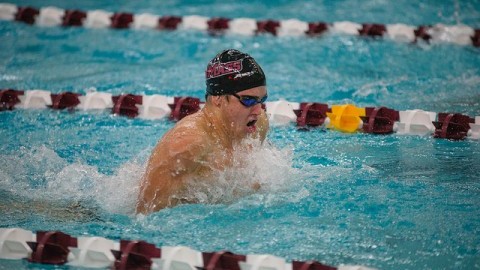 The final dual meet of the season took place last weekend for both of the Massachusetts men’s and women’s swimming and diving squads, which both fell to Fordham while working to perfect their preparations for the upcoming Atlantic 10 Championships in February.

The Minutewomen dropped their competition in the Bronx, New York by a score of 190-110 but were highlighted by five first-place finishers.

On the men’s side, a tighter finish of 156-142 was the final score as swimmers and divers took first in six separate events.

Heading into the final two events on Saturday, the Minutemen held a narrow 133-129 lead over the Rams.

But with the 14 points they were able to garner in the 200 IM as well as placing first and third in the 200 freestyle relay, Fordham claimed a late lead they would not give up.

The focal point of the men’s competition came on the diving boards with UMass divers sweeping both events, led by junior Trent Kindvall.

On the one-meter board, Kindvall placed first with a score of 296.25.

The Minutemen dominated the three-meter event as well, with Kindvall once again taking the top spot with a score of 322.12 with teammate Robert Barry placing second with a 261.67.

In the water, first place finishes from Al Madden, Owen Wright and Chris DiGiacomo led the way for UMass.

Coming off remarkable showings in the two previous dual meets versus Bryant and Dartmouth, in which he placed first in three of four races, Madden picked up right where he left off at Fordham.

Prior to this season, Madden’s primary role in the pool was based around sprints rather than longer races like the 200-yard breaststroke.

“I knew I was going to have to learn a new race when I got here so I’m happy to have found success with it,” said Madden. “I definitely have to thank my coaches for that.”

Boric and Roush shine on the boards in loss to Fordham

Although the Minutewomen couldn’t finalize their season with a dual meet win, they have plenty of reason to feel confident moving forward into February.

In the one-meter event, a score of 280.57 granted the 20-year-old from Kansas the top spot. A score of 268.20 on the three-meter board awarded her number one again.

Maja Boric followed Roush’s impressive example on the boards by placing top three in both events as well.

On the one-meter, Boric’s score of 265.27 awarded her a second-place finish. On the three-meter, the freshman from Croatia placed third with a score of 263.62, missing the second spot by just four points.

For UMass swimmers, stand out performances in the 100 backstroke, 1,000 freestyle and 200 yard medley led the way.

In the 100 yard backstroke, Maddie Biron continued the success she found last weekend at the Dartmouth Invitational and finished first with a score of 58.65.

Biron also had her presence felt in the 200 yard medley relay. Working with fellow Minutewomen Chelsea Meiring, Rachel Grant and Ansley Baker, the team triumphed and took the top spot, finishing with a time of 1:47.73.

Olga Egkorova also picked up where she left off in the previous dual meet, and finished first in the 1,000 yard freestyle event with a time of 10:32.35.

Only three weeks separate the Massachusetts swimming and diving teams from their chance to compete in the A-10 Championships.

Preparations for the three-day event have been ongoing and began far before the start of the season. From the early mornings in the gym to the endless repetitions in the pool, swimmers and divers on both sides of the UMass program look to go out and perform to the peak of their potential.