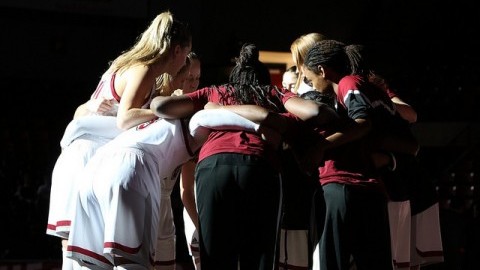 After the first 30 minutes of Saturday’s game against George Washington, the Massachusetts women’s basketball team appeared primed to take down one of the top teams in the Atlantic 10, leading by 15 entering the fourth quarter.

Unfortunately for UMass (9-12, 3-5 A-10), the shots stopped falling, and the passes stopped connecting. Ten minutes, 10 turnovers, seven missed shots, and zero points later, the Minutewomen and the Colonials were headed to overtime.

The offensive woes continued into the extra frames for UMass as the Minutewomen tallied just seven points—all from the free throw line—over two overtime periods before ultimately falling to GW (13-6, 6-1 A-10) 60-54 (2 OT).

“It’s a tough game. I’m really proud of our effort. If we played half as hard when we played St. Bonaventure, we would have won that game,” Verdi said.

“We didn’t score very many points, seven points in the last 20 minutes,” Verdi said. “I think Leah coming out of the game that hurts us too. We don’t have a point guard who can run us, and we couldn’t really execute appropriately, but I’m proud of our effort.”

The UMass offense looked unstoppable in the third quarter. Tallying 21 points in a period that was capped with a 3-pointer from senior walk-on Megan Burke with seven seconds remaining in the quarter, but that would prove to be the final Minutewomen field goal of the day.

“I just think that we got tight and for whatever reason, couldn’t put it in the basket, and it’s something we’ve got to work on,” Verdi said.

“Honestly things weren’t dropping, we were making too many mistakes, there was no flow to the offense, and so it was the turnovers and everything, it just wasn’t working,” senior Alyx Stiff said.

Stiff powered the UMass offense, finishing with a team-high 18 points off 6-of-10 shooting from beyond the arc.

The Colonials actually appeared to win the game at the end of the first overtime period when they added another second chance put-back, but after a review the referees waived off the basket.

GW could have finished the game in regulation if they knocked down any of the large number of open 3-pointers they missed, finishing at 9-of-44 from beyond the arc.

For a second straight game the Minutewomen were dominated on the boards, with GW winning the rebounding battle 58-35, including 30 offensive rebounds.

“When you look at our personnel, Maggie is 6’2” and the next tallest player is 5’9”,” Verdi said. “But we’ve got to do a better job of when we’re in front of people, we’ve just got to drive them back. We’re there, but we just don’t drive them back, and we’ve got to be a little more aggressive in that regard.”

Forward Lexi Martins put up a game-high 25 points for the Colonials to go along with 10 rebounds.

Freshman Hailey Leidel added a double-double with 14 points and 10 rebounds for the Minutewomen, but she also finished with nine turnovers.

“It’s just cool, it’s a different experience, and it’s just something that you take advantage of and you make the most of it,” Burke said.

Verdi attributed Burke’s start to the hard work she has been putting in at practice.

“I’m playing those who come to practice every day and work hard. Those who work the hardest for us in practice will play for us here at the University of Massachusetts,” Verdi said.

Stiff had high praise for what Burke has accomplished since walking on to the basketball team in her senior year after playing four years on the UMass women’s soccer team.

“I’m so proud of her,” Stiff said. “She works hard every single day at practice and she plays a really big role on our team even though she doesn’t typically play a lot of minutes. But the last few games she’s done a lot of great things for us, and we just all are so proud of her.”

The Minutewomen return to action on Wednesday when they travel to La Salle for a noon tipoff.