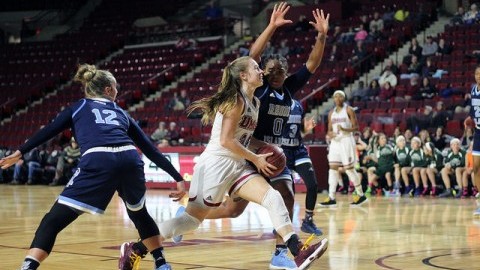 After blowing double-digit fourth quarter leads in back-to-back games, the Massachusetts women’s basketball team nearly pulled off a comeback of its own on Saturday on the road against Virginia Commonwealth, but eventually fell three points short, losing 55-52 in its fourth straight loss.

In an action-packed final minute, UMass (9-14, 3-7 Atlantic 10) took advantage of a pair of missed free throws by the Rams (12-10, 5-4 A-10) and two quick scores off inbound passes, one a layup by junior Maggie Mulligan and the other a three-pointer by freshman Hailey Leidel, to make it a one-point game with four seconds left.

After VCU’s Isis Thorpe sank both free throws with 1.3 seconds remaining, the Minutewomen’s inbound pass deflected off a member of the Rams and went out of bounds, moving the inbound pass up to half court.

After the referees reviewed the play, the game clock was set to 0.1 seconds, effectively ending the game because Leidel did not have time to put up a final shot.

UMass coach Tory Verdi felt the Minutewomen should have had more time to run their final play.

“There’s 1.3 on the clock, the ball was tipped quickly and went out of bounds. I was drawing up a play and next thing I know they’re inbounding the ball with 0.1 on the clock, without any explanation,” Verdi said.

“Not sure what they saw because we went back and looked at video, it’s very hard to see the clock, so for them to call it and say 0.1, it was a little disheartening.”

For the second game in a row, UMass started the game strong, building a 17-6 lead over VCU after the first quarter. The Minutewomen opened the second quarter scoreless for over seven minutes which fueled a 12-0 run for the Rams.

“The combination of turning the ball over and missing high-percentage shots, layups around the rim, you can’t have. This is another game where we [have] 20-plus turnovers, our goal is to be at 16 or below,” Verdi said.

VCU remained in control of the game following halftime. The Minutewomen trailed by 10 points with less than six minutes left in the game, but a free throw from Mulligan followed by layups on their next three possessions made it a one-possession game with three minutes left.

Verdi appreciated the effort and execution UMass showed in the final period.

“[They showed] great fight. [They’re] resilient. [We] executed down the stretch really, really well,” Verdi said. “That’s one thing about this team, they have fought probably every game but one. As a coach, that’s what you what to see.”

“The defense was great. Our players did a really good job of understanding what they were doing and we did a great job of attacking where they wanted to throw the ball,” Verdi said.

For UMass, Leidel scored a game-high 18 points and hauled in 10 rebounds, her third straight double-double. Mulligan finished with 11 points and nine rebounds, one board shy of her 17th double-double of the season.

The Minutewomen will look to end their losing streak when they return to Amherst Wednesday to host Saint Louis. Tipoff is scheduled for 7 p.m. at Mullins Center.