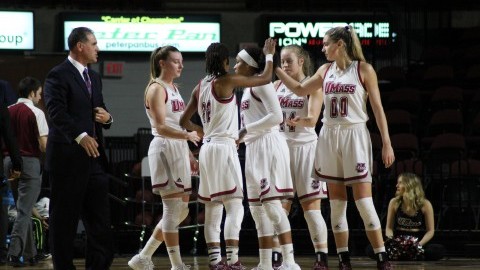 On paper, Sunday afternoon’s matchup against Duquesne, the Atlantic 10’s second ranked team in the conference preseason poll, would be difficult for the Massachusetts women’s basketball team, the lowest ranked preseason team.

But that’s why they don’t play basketball games on paper.

UMass coach Tory Verdi liked what he saw from his team on both ends of the court as the Minutewomen put up their second highest point total of the season. They also limited the dangerous 3-point shooting Duquesne team to just five 3-pointers on 24 attempts.

“Just really excited for our kids and our program,” Verdi said. “This is a big win for us and I just thought that we controlled the tempo from start to finish … they executed both offensively and defensively, they rebounded. We did a really nice job and we faced some adversity down the stretch, turned the ball over, got kind of tight, but we were there and we made that next play.”

UMass got out to a hot start, building a 28-17 lead after the first quarter, thanks to 13-4 run to close out the quarter and 12 points from junior Maggie Mulligan. Mulligan finished with 18 points and 11 rebounds, good for her 15th double double of the season to remain tied with Washington’s Chantel Osahor for the most in the country.

“It’s very important for us. We’ve got to get off to a good start and when we do, the more confidence we have and we get it going a little bit,” Verdi said.

The Minutewomen maintained a comfortable lead for the bulk of the final three quarters, but an 8-0 fourth quarter run for Duquesne brought the Dukes within four points with 2 minutes, 20 seconds remaining, the closest margin since UMass began its run with 3 minutes left in the first quarter.

The Minutewomen responded as junior Leah McDerment pulled down a rebound and hit both free throws after being fouled, before junior Alyx Stiff did the same on the ensuing possession to get the lead back to eight.

“We faced some adversity with Ryan Holder getting into foul trouble, and we had some kids playing in tough situations who aren’t used to that, but then we made a play, we got a rebound, they fouled us, we went to the free throw line, and we knocked down shots,” Verdi said. “So when it came to when we had to make that next play, we did that throughout the night.

McDerment was one of several players singled out by Verdi after the game for her strong play, as the Stockport, England native filled up the stat sheet with eight points, eight rebounds, and 10 assists. Verdi also complimented freshman Hailey Leidel, who once again led the team with 22 points.

Stiff scored a career-high 19 points, making 10 of 11 from the free-throw line, where UMass really excelled, converting 26 of 29.

“It’s huge, and that’s our goal,” Verdi said. “Our goal is to get to the free-throw line 20 times a game and when we do that, a lot of good things happen. The fact that we knocked the majority of them down here tonight just helps us and propels us to the win.”

With an even conference record of 3-3 and nearly even overall record of 9-10, this Minutewomen team has already accomplished more than many expected coming into the season leaving Verdi ecstatic with the current state of the team.

“The state of the team is that these kids believe,” Verdi said. “They believe in what we’re doing, they understand it’s a process, we’re getting better each and every single day. Anything’s possible, and they believe that, they truly believe that… and for what they’re doing, right now, is just absolutely unbelievable in my eyes.”

Sunday’s game marked UMass’ only scheduled nationally televised game in the regular season, and the victory showcased to a wider audience what the team is capable of accomplishing.

“I think it helps our program,” Verdi said. “Whenever we can play on national TV and people see our brand, see who the University of Massachusetts is and what we’re trying to do, it’s phenomenal.”

“My job when I got hired was to take this program and catapult it into the top 25 in the country, and that’s exactly what we’re going to set out to do.”