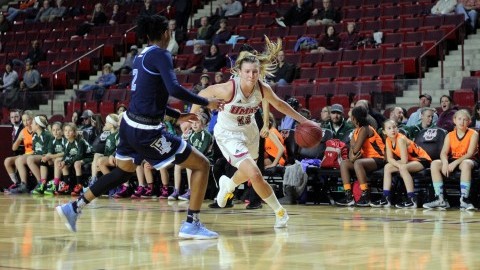 Fresh off an exciting last-second win against Rhode Island on Wednesday, the Massachusetts women’s basketball team had the opportunity to even up its conference record against Saint Joseph’s, who entered Saturday’s game with just three wins.

UMass coach Tory Verdi watched his team struggle in just about every facet of the game.

St. Joe’s guard Kristalyn Baisden opened the game on fire from beyond the arc, shooting 4-for-5 from 3-point range in the first half, and finished with a career-high 18 points.

Even when the Minutewomen were able to put a good play or two together, they could not sustain their momentum for an extended period of time.

A block by Maggie Mulligan led to a Hailey Leidel 3-pointer which cut the deficit to four points early in the 2nd quarter, but the Hawks answered with a 3-pointer of their own on the ensuing possession and finished the half with a 19-8 run to open up a 15-point lead at the break.

The game became even more out of hand in the third quarter when the Hawks opened the second half with a 20-2 run, outscoring UMass 31-6 in the period.

The final score would have looked even more lopsided if not for the Minutewomen outscoring St. Joe’s 19-10 in the final period when the outcome of the game had already been decided.

Junior Maggie Mulligan led UMass in points with 14 and grabbed 10 rebounds to secure her 13th double double of the season, tied with Washington’s Chantel Osahor for the NCAA lead, before fouling out in the final minutes on Saturday.

“I thought Maggie Mulligan played hard the entire game and Jessica George went in and did some nice things and played hard. But again, having two people playing hard is not enough for us,” Verdi said.

Verdi believes the Minutewomen need a more consistent approach in order to play to the level they are capable of reaching.

When asked how UMass could bounce back from such a difficult loss, Verdi said the team just needs to get back to playing its game.

“It’s not like brain surgery or anything, it’s just we didn’t play well,” Verdi said. “We didn’t do all the little things and we got outworked, we got outhustled, we got out played. It’s about just going out there, being disciplined, being who we are, and for whatever reason, we did not do that here tonight. We did not show up.”

The Minutewomen will have four days off before taking on Davidson, which Verdi said the team will use to work on competing, doing so by attaching a time and score to every drill in practice.

UMass will be on the road again Thursday, taking on the Wildcats at Davidson, with tipoff scheduled for 11:30 a.m. for a rare morning game.